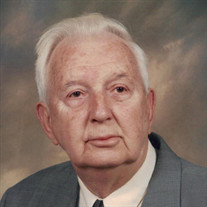 William McKinley Reissner, Jr., 91, of Salisbury, passed away Tuesday, June 29, 2021 at Novant Health Rowan Medical Center Salisbury, NC after being in declining health over the past year. Born July 8th, 1929 in Newport News, Virginia, he was the son of the late Drusilla West Reissner and William McKinley Reissner, Sr. Mr. Reissner received his Bachelor of Science degree in Commerce, University of Virginia, Charlottesville, VA. He was a veteran of the United States Air Force and served 4 years as an Airman First Class in 75th Fighter Squadron. He was Manager of Montgomery Ward, Salisbury and various other companies before retiring. Mr. Reissner was a member of St. Paul’s Lutheran Church and served on various committees, the Salisbury Lions Club. Lions Club was a very important part of his life and he served in all capacities and received various awards: Melvin Jones Award 2016/2017, Lion of the Year in 2013, and was a Jack Stickley Fellow. He volunteered at Rowan Helping Ministries, VA Medical Center with Bingo, The Brian Center with activities. In addition to his parents, he was preceded in death by his wife, Dorothy Yanacek Reissner on August 24, 1995. Family was also very important to him and he loved having his family together for various celebrations. Those left to cherish his memory are his children; Susan Bernhardt (Ben) of Salisbury, Gary Reissner (Carey Lokey) of Atlanta and Nancy LaPointe (Brian) of Fort Mill, SC; grandchildren, Jason Bernhardt (Amanda), Lisa Cerda, Jeremy LaPointe, and Megan LaPointe; great-grandchildren, Brinley Bernhardt, and Amaya Cerda. The family will receive friends from 10-10:45 AM Saturday at St. Paul’s Lutheran Church followed by the funeral service at 11 AM with Pastor Mark Ryman, officiating. Interment will follow at the church cemetery with Military Graveside Rites conducted by the United States Air Force and the Rowan County Veterans Honor Guard. Memorials may be made to St. Paul’s Lutheran Church Capital Fund, 205 St. Paul’s Church Rd., Salisbury, NC 28146. Summersett Funeral Home is serving the Reissner family. Online condolences may be made at www.summersettfuneralhome.com.

William McKinley Reissner, Jr., 91, of Salisbury, passed away Tuesday, June 29, 2021 at Novant Health Rowan Medical Center Salisbury, NC after being in declining health over the past year. Born July 8th, 1929 in Newport News, Virginia, he was... View Obituary & Service Information

The family of William McKinley Reissner Jr. created this Life Tributes page to make it easy to share your memories.

Send flowers to the Reissner family.