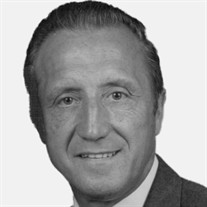 William Charles (Bill) Klein, 91, loving husband, father, and grandfather passed away peacefully on November 10th, 2020. Born October 31st, 1929 in Joilet, Illinois, he was the son of George William and Gertrude Louise (Gertie) Wittenweg Klein. Bill was a graduate of Joilet Township High School where he enjoyed playing the clarinet in the all-boys award winning band. He then graduated from Joilet Junior College before serving four years in the Air Force as a dental technician during the Korean War. Upon his return home, he attended Marquette University and graduated with a Doctor of Dental Surgery degree. Later, he would also receive a Masters of Public Health degree from UNC Chapel Hill. Bill began his career working for the Public Health Department training military dentists in new methods and procedures. Then to be more available to his family, he began a long and rewarding career as a dentist at the VA hospital in Salisbury, NC. He was a member of Sacred Heart Catholic Church and the Spencer Moose Lodge. Upon retirement, Bill was better able to pursue his lifelong passion of the great outdoors. He and his wife, Sarah, went on many RV camping trips throughout the United States. He also enjoyed gardening, hunting, and most of all fishing. He spent many happy days in the bays around sunny Pine Island, Florida fishing with his family, friends, and dogs. Even in his later years, he liked to sit in his yard watching the birds, butterflies, and beauty of nature. He will be remembered by his loved ones for his quick wit, his generosity, and most of all his unconditional love for his family. He will be greatly missed. Preceding him in death were his parents, his two siblings, Richard George Klein and Mary Lou Delaney, as well as one son, Tony Frank Klein. He leaves to cherish his memory his wife of over sixty years Sarah Bland Klein, his son Gary (Dee Dee) Klein, his daughter Kay Ann (Steve) Sohn, and his grandchildren Katelyn, Julie, and Molly Sohn and Andrew Klein. Service: A funeral mass will be held at Sacred Heart Catholic Church on November 25th at 1pm. Father John Eckert will preside. Burial will follow at the National Cemetery in Salisbury. Military Rites will be provided by The United States Air Force and the Rowan County Honor Guard. Memorials: Memorials may be made to Sacred Heart Catholic Church, 375 Lumen Christi Ln, Salisbury, NC 28147 Summerset Funeral Home is serving the Klein Family. Online condolences may be made at www.summersettfuneralhome.com.

The family of William Charles Klein created this Life Tributes page to make it easy to share your memories.

Send flowers to the Klein family.