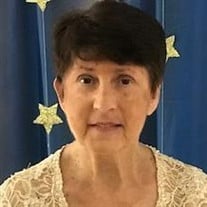 Virginia Ann Wilhelm , 76 of Salisbury, passed away unexpectedly Sunday, December 20, 2020 at Atrium Health Cabarrus. Born March 7, 1944 in Rowan County, she was the daughter of the late Ed Bame, and Myrtle Virginia Blackwelder Bame . In addition to her parents, Ann was also preceded in death by her husband Robert B. “Buddy” Wilhelm and a brother, Wayne Bame. She attended East Rowan Senior High School and was a member of St. Paul’s Lutheran Church. Early in her life, Mrs. Wilhelm was a stay at home mother, later seeking employment from the Salisbury Post until her retirement. She loved gardening that gave her much joy. She was a loving and caring wife, mother, grandmother, and sister. She will truly be missed by all that knew her. Those left to cherish her memory are her sons Robert Brian Wilhelm and Anthony Kim Wilhelm: six grandchildren, Abby, Ally, Ethan, Ellie, Bailey, and Lucas, and one sister Amelia Poplin. There will be a Private family graveside funeral Wednesday, December 23, 2020. The funeral will be at St. Paul’s Lutheran Church with the Rev. Dr. Brad Miller officiating. Memorial donations may be made to St. Paul’s Lutheran Church 205 St. Paul’s Church Road Salisbury, NC 28146. Summersett Funeral Home is serving the Wilhelm family. Online condolences may be made at www.summersettfuneralhome.com.

The family of Virginia Ann Wilhelm created this Life Tributes page to make it easy to share your memories.

Send flowers to the Wilhelm family.