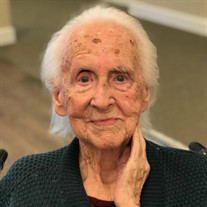 Valerie Jean Maeder Chandler, died Saturday October 3, 2020 at Arbor Landing @ Hampstead (North Carolina). She was born January 2, 1920 (100 years!) in Newark, NJ. (although she wouldn’t admit that!) to Frank Ronald Maeder and Hazel Louise Patterson Maeder. She moved to Salisbury at a young age, and met Robert (Bob to everybody else, but Rob to her!) Lindon Chandler, Jr. her husband of 69 years until his death in 2010. She was a graduate of Boyden High School in Salisbury, and attended Catawba College. She worked in the offices of Rowan Cotton Mills for a time, and then became a Navy wife and Mother. Mrs Chandler was a former member of First United Methodist Church of Salisbury until their move to Lake Norman and became a member of Rehobeth United Methodist Church in Terrell. She is preceded in death by her husband in 2010. A daughter Linda Jean Chandler, and two sons, Robert Lindon Chandler, III, and Stephen Renick Chandler, and a brother Ralph Maeder. She was active in the “Lady’s Circle” at church, various bridge clubs and garden clubs over the years, and loved to go to the Local Library and check out books to read and cultivate her azaleas, camelia, roses, and other flowers in her yard. (She was one of the first “Earth Children” all-natural types!). She collected antique china teacups and saucers, and also antique sewing tape measures, along with current and antique musical carousels. She loved having all her children, grandchildren, and great grandchildren come to the lake and watch them enjoy the water activities, many times taking them on boat rides or water skiing, etc. Every Christmas was spent at the lake house with family, which was a great crowd. She is known affectionately as “Briner” to all the grandchildren and great grandchildren and in-laws. Her first granddaughter Tracey tried as a toddler to say “Grandma” and somehow that’s what it transitioned to. Her and “Pa” as her husband was called always took the grandchildren on various RV trips to Dollywood, the beach, camping, fishing, etc, and gave them some wonderful lifetime memories. She loved her poodles, the last one named Sambeau (pretty Sam in French!) became her closest companion in her last years. She left her home on Lake Norman, only at age 98, to move to Arbor Landing at Hampstead (NC), which quickly became her new home near her daughter Susan and her husband Reis. Before her move to Hampstead, she did have in-home care by Visiting Angels and became particularly fond of her main caretaker for a little over 5 years, Lisa Lineberger. She had many wonderful neighbors and church friends at the Lake that always took extra effort to look in on her, and visit her. She is survived by her daughter, Susan Chandler Smith and her husband Reis of Hampstead, NC; beloved daughters-in-law, Gayle Chandler and Rebecca Chandler; grandchildren, Tracey Draper and her husband Rob, Nick Chandler and his wife Laurel, Brad Chandler, Jody Lang and his wife Jaimie, IV Chandler and his wife Jen, Travis Lang and his wife Jaime, and great grandchildren Riley Draper, Emma Chandler, Morgan Chandler, Chandler Draper, Evan Lang, Hayden Lang, Annie Chandler, Kelsea Lang, and Soleil Lang. A small family graveside service will be conducted by Rev. Dr. Robert L. Kerr at Rowan Memorial Park Mausoleum in Salisbury at 2 PM on Saturday (October 10). Memorials: May be made to Rehobeth United Methodist Church, 9297 Sherrills Ford Road, P.O. Box 356, Terrell, NC 28682 or Lower Cape Fear LifeCare/Hospice, 1414 Physicians Drive, Wilmington, NC 28401. Summersett Funeral Home is serving the Chandler family. Online condolences may be made at www.summersettfuneralhome.com.

The family of Valerie Jean Maeder Chandler created this Life Tributes page to make it easy to share your memories.

Send flowers to the Chandler family.