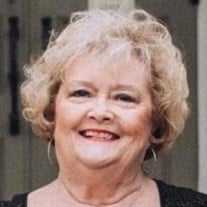 Tonda Raye Morefield, 75, of Salisbury, NC, went to be with her heavenly Father on December 13, 2020, at Presbyterian Hospital in Charlotte from complications of COVID 19. She was born on November 28, 1945, in Lexington, NC. Tonda was preceded in death by her parents Calvin “Crip” and Alice Charles Layton of Lexington, NC, James Ledwell of Charlotte, NC, and her husband, Richard Morefield, Jr. For many years, Tonda shared her love for children through her involvement as a staff member at North Hills Christian School and secretary at North Hills Presbyterian Church Tonda is survived by her three children Dale (Kris) Morefield, of Waxhaw, NC, Amy (Jeff) Lindsey of Salisbury, and Michael (Christy) Morefield of Lexington. She was a beloved “Mimi” to eleven grandchildren, Devan (Damian) Beaver of Salisbury, Samantha (Nick) Johnson of Knoxville, TN, Maggie Morefield of Waxhaw, Emily (Ben) Kluttz of Mt. Ulla, Lauren Morefield, of San Diego, CA, Tyler Morefield, Emily Morefield, Jackson Morefield, and Carter Morefield, all of Lexington, Joshua Lindsey and Jordan Lindsey of Salisbury; and five great-grandchildren, Collins Beaver, Tennasyn Beaver, Atlas Johnson, Zoe Johnson, and Barrett Kluttz. She is also survived by her special cousin, Grecia Sanniota (Vic) of High Point. A private graveside service will be held at Rowan Memorial Park Cemetery with a Celebration of Life service to be held at a later date. The family wishes to thank the doctors and nurses of both Rowan and Presbyterian Hospitals in addition to their friends and family for their support during her recent illness. In lieu of flowers, memorials can be made in her name to North Hills Christian School, 2970 West Innes Street, Salisbury, NC 28144. Summersett Funeral Home is serving the Morefield family. Online condolences may be made at www.summersettfuneralhome.com.

Tonda Raye Morefield, 75, of Salisbury, NC, went to be with her heavenly Father on December 13, 2020, at Presbyterian Hospital in Charlotte from complications of COVID 19. She was born on November 28, 1945, in Lexington, NC. Tonda was preceded... View Obituary & Service Information

The family of Tonda Raye Morefield created this Life Tributes page to make it easy to share your memories.

Send flowers to the Morefield family.