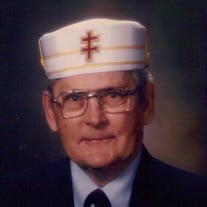 Tommy Olin Eller, 94, of Salisbury, passed away April 22, 2022 at Novant Health Glenn A. Kiser Hospice House. Born April 24, 1927 in Salisbury, NC he was the son of the late William Eller and Elsie Beaver Eller. He was a veteran of World War II, serving in the South Pacific. He also participated in the Atom Bomb test in the Marshall Islands in 1946. After service he worked for Ketner Supermarket until it was sold to Winn Dixie. In 1956 he joined Ralph Ketner, Brown Ketner and Wilson Smith in the first Food Town Store. He held many positions at Food Town, Perishable Director and Area and Regional Market Director until retiring in 1982. He was a member of Bethel Lutheran Church, Eureka Masonic Lodge, 33rd Scottish Rite, Oasis Shrine and Royal Order of Scotland. He was honored with receiving his 50 year pin from the Order of the Mystic Shrine. Mr. Eller was a board member and Emirst of the Masonic Children Home in Oxford, NC and received the Montfort Medal for charity work. He loved helping children and was also involved in Cameron Boys Home and the Shriners Hospital for Children. He was also a member of the American Legion, VFW and other organizations. In addition to his parents he was preceded in death by his first wife, Edith; son, Mike; daughter, Jodie Lean; brothers, Bill, T.R., Jack, Bobby, Benny and Richard Eller and sister, Becky Helms; his second wife of 46 years, Jeanie Curlee Eller. Left to cherish his memory are his son, Steven A. Safrit, Jr. and wife Barbara of Salisbury; grandson, Blake O. Safrit; granddaughter, Sydney Drew Embler and husband Cameron; sisters, Eloise Eller of Wilmington, Patsy Koon of Winston-Salem; brother-in-law, Bob Helms of Cary; sisters-in-law, Anne Curlee and Kim Curlee. Also surviving are special friends, Ronnie and Bonnie Marsh, Donnie and Lynn Marsh, Janice Graham and Chris and Elizabeth Richardson. Tommy never met a stranger. His intentional way of living joyfully in the moment was an inspiration to all who knew him. His grandfather told him, “the best thing you can leave behind when you go is what good you have done for others”. A philosophy he lived up to. Funeral service will be held at 11am Wednesday, April 27 at Bethel Lutheran Church with Pastor Carroll Robinson officiating. A celebration reception will follow in the church fellowship hall. Masonic Rites and Military Honors will be conducted at 3PM in Rowan Memorial Park Mausoleum. Memorials may be made to the Masonic Home for Children, 600 College Street, Oxford, NC 27565; Scottish Rite Eye Fund, 400 University Hall Dr., Boone, NC 28607; Shriners Hospital for Children, 950 W. Faris Rd., Greenville, SC 29605. Summersett Funeral Home is serving the Eller / Safrit family. Online condolences may be made at www.summersettfuneralhome.com.

Tommy Olin Eller, 94, of Salisbury, passed away April 22, 2022 at Novant Health Glenn A. Kiser Hospice House. Born April 24, 1927 in Salisbury, NC he was the son of the late William Eller and Elsie Beaver Eller. He was a veteran of World War... View Obituary & Service Information

The family of Tommy Olin Eller created this Life Tributes page to make it easy to share your memories.

Send flowers to the Eller family.