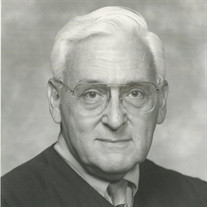 Thomas Waller Seay, Jr., 94, of Spencer, passed away Tuesday, September 15, 2020 at Novant Health Rowan Medical Center. Born April 14, 1926 in Salisbury, NC he was a son of the late Dr. Thomas Waller Seay, Sr. and Inez Marks Seay. He attended Spencer schools and graduated from Spencer High School in 1943. He served in the United States Army from 1944 to 1946, and upon discharge, re-entered Duke University and received an A.B. degree in 1949 and a J.D. degree in 1952 from Duke University Law School. He began his practice of law in Salisbury and served as prosecuting attorney and thereafter, Judge of Rowan court from 1958 to 1960. He served two terms in the State Senate from 1963 to 1966. He was appointed Resident Judge of Superior Court in 1967 serving until his retirement in 1998.He served as a Faculty Advisor for the National Judicial College, University of Nevada, was a member of the Rowan County Bar Association and served as Chairman of the Jury Instruction Committee. Judge Seay was a member of Central United Methodist Church, Kiwanis Club of Salisbury, Spencer Masonic Lodge, Rowan Shrine Club, and American Legion Post 0342. In addition to his parents he was preceded in death by his wife, Martha “Patty” Zimmerman Seay on March 23, 2018; brother, James A. Seay and a sister, Ruth Austin. He is survived by two daughters, Jane Seay Patterson (Rufty) of Spencer and Linda Seay Robertson (Randy) of Raleigh. He was known as "D’Daddy" by his five grandchildren, Tommy Patterson (Traci), Joy Patterson Canup (Donnie), Steven Patterson (Ashley), Martha Robertson Marti (Sid), and Janie Robertson. Great grandchildren include Colby and Carlee Patterson, Hallie and Lila Canup, and Landon, Addie, and Silas Patterson. He is also survived by many loving nieces and nephews. A graveside service will be conducted at 1:00 p.m. Saturday, September 19, 2020 at Rowan Memorial Park with Rev. McKenzie Sefa, officiating. Military honors will be provided by the Rowan County Veteran’s Honor Guard. Memorials may be made to Central United Methodist Church, 200 Fourth Street, Spencer, NC 28159. Summersett Funeral Home is serving the Seay family. Online condolences may be made at www.summersettfuneralhome.com.

The family of Thomas Waller Seay Jr. created this Life Tributes page to make it easy to share your memories.

Send flowers to the Seay family.