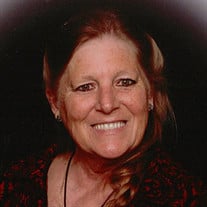 Mrs. Suzanne Mae Bedford Graham, 72, of Mt. Ulla, NC, passed away on Wednesday, November 17, 2021, at the Novant Health Glenn A. Kiser Hospice House. Mrs. Graham was born in Middletown, New York on August 11, 1949, the daughter of Dorothy Mae Vreeland Bedford of Salisbury and the late Richard Monroe Bedford. She was educated in Orange County schools and attended Nursing School where she received her BS Degree. She worked as a Respiratory Therapist until her first retirement. She then worked as a traveling nurse for Lincare Hospice until she permanently retired. She loved all types of horses, particularly Percherons and Paints and enjoyed quilting and needlepoint. Left to cherish her memory in addition to her mother are her husband, Curtis C. Graham, Jr. who she married May 11, 2009; sons, Brian Richard Brighton of Middleton, NY, Jason Andrew Brighton of Otisville, NY; brother, Michael Richard Bedford of Cleveland, NC; sister, Cindy Lou Bridges (Chip) of Salisbury, NC; grandchildren, Joshua and Jayden Brighton and several nieces and nephews. A Graveside Service will be held at 9:00 a.m. Monday, November 29, 2021 at the Salisbury National Cemetery with Pastor Ron Loflin officiating. Summersett Funeral Home is serving the Graham family. Online condolences may be made at www.summersettfuneralhome.com.

The family of Suzanne Mae Bedford Graham created this Life Tributes page to make it easy to share your memories.

Send flowers to the Graham family.