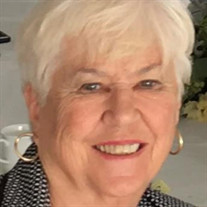 Stella Shadroui, 90, died Friday, November 12, 2021 at her residence at Oak Park Retirement, Salisbury, NC, following declining health. She was preceded in death by her husband Peter J. Shadroui in 2001, her brother Maurice Lareau, and her sister Madeline Tate. She was born in Waitsfield, Vermont and attended Mount Saint Mary Academy in Burlington, Vermont. Stella and Peter moved their family to Salisbury, NC in 1965. She and her family were longtime members of Sacred Heart Catholic Church, and she was an active member of Catholic Daughters for many years. Stella completed an AB degree at Rowan Technical Community College. Stella worked in the Salisbury City Schools for about 20 years, was a very active gardener and served as president of the Garden Club at Hall House. She actively supported the Salisbury Historic Society. Stella had many hobbies and interests, including being an avid tennis player and “beach bird”. After playing club and tournament bridge for many years, she received her Life Master in Duplicate Bridge. Stella was blessed with four children, Mike Shadroui (Alexandra) of Cleveland, NC; JoAnne Shadroui of Wilmington, NC; George Shadroui (Elvia Olivas) of Memphis, TN; and Marie Robbins (Bryan) of Chester, VA. She leaves behind seven grandchildren, Teresa, Michelle, Cathya (John), Katie , Talia, John Paul and Lillianna; and two great-grandchildren, Stella and Aurelia. A private funeral mass will be held for the family. Please remember her in prayer and pray for the souls of her family and loved ones who have gone before her. Summersett Funeral Home is serving the Shadroui family. Online condolences may be made at www.summersettfuneralhome.com.

Stella Shadroui, 90, died Friday, November 12, 2021 at her residence at Oak Park Retirement, Salisbury, NC, following declining health. She was preceded in death by her husband Peter J. Shadroui in 2001, her brother Maurice Lareau, and her... View Obituary & Service Information

The family of Stella Lareau Shadroui created this Life Tributes page to make it easy to share your memories.

Send flowers to the Shadroui family.