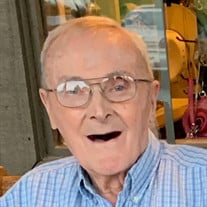 Stanton Thomas “Tom” Monroe, 88, of Salisbury passed away Tuesday, August 24, 2021 at the Lutheran Home at Trinity Oaks. Born February 12, 1933 in Bainbridge, NY, he was the son of the late Roswell M. Monroe and Isabel Sprague Monroe, and his step-mother Irene French Monroe. A graduate of Bainbridge Central High School, he attended Cornell University studying Horticulture. Greenhouse growing flowers and plants was the love of his life. He worked 45 years in greenhouses, the last 20 of which he and his wife Jane owned and operated Obenchains Garden Center in Roanoke, VA. He was a charter member and first President of the Etowah-Horseshoe Volunteer Fire Department in 1964. A member of the Salem Kiwanis Club and served as President in 1990-91. Mr. Monroe was a member of the First Baptist Church of Salisbury and the Summa Petenda Sunday School Class. In addition to his parents, he was preceded in death by his wife, Jane Miller Monroe on July 5, 2013, brothers, Roswell Sprague Monroe and David Miller Monroe, step son, Jeff Powers. Those left to cherish his memory are his sons, Thomas Brian Monroe (Vickie) of Charlotte and Gary Kent Monroe of Salisbury; grandchildren, Brian Monroe (Nicole) and Emily Monroe; grandchildren, Luke Monroe and Hope Monroe; step-son, Gary Powers (Tam) of Salisbury; step-daughter in law, Sandy Powers of China Grove; five step grandchildren and eleven step great-grandchildren. The family will receive friends from 10-11 AM followed by the funeral service at 11 AM Saturday (August 28th) in Summersett Memorial Chapel with Rev. Brian Farmer officiating. Interment will follow at Bethel Lutheran Church Cemetery. Memorials may be made to the First Baptist Church, 223 N. Fulton St., Salisbury, NC 28144. Summersett Funeral Home is serving the Monroe family. Online condolences may be made at www.summersettfuneralhome.com.

The family of Stanton Thomas "Tom" Monroe created this Life Tributes page to make it easy to share your memories.

Send flowers to the Monroe family.