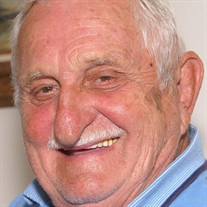 Stanley Krzywonos, 97, of Taylorsville, formerly of Pawtucket, RI, died on December 25, 2020. He was the beloved husband of the late Theresa (Bouchard) Krzywonos, married July 1, 1950, for 66 years. Born in Pawtucket, RI, he was a son of Polish immigrants, the late Wojciech and Katarzyna (Kulik) Krzywonos, and was a life long resident of Pawtucket, RI. For the past three months, he resided at Valley Nursing Center, Taylorsville, NC and was a recent resident of Oak Park Retirement in Salisbury, NC. Stanley was a devoted husband, father, grandfather, great grandfather, son and brother who dedicated his life to family. He leaves two children: Ann (Krzywonos) Maciejowski and her husband Joseph of Lenoir, NC, and John Krzywonos and his wife Judith of Browns Summit, NC; two grandchildren: Katie (Krzywonos) Latimer and her husband Ryan of Clyo, GA, and Andrew Krzywonos and his wife Kristina of Durham, NC; four great-grandchildren, Evelyn, John, and Mason Latimer and Alice Krzywonos; a sister, Mary Kullas of Norton, MA; several nieces, nephews, and extended family members. He was the brother of the late Joseph Krzywonos, Thomas Krzywonos, Charles Krzywonos, Matthew Krzywonos, Genevieve Salisbury, and Stasia Slota. Stanley Krzywonos, a U. S. Army Veteran, proudly served during World War II and took part in the Normandy invasion, Omaha Beach, D-Day plus 2, and The Battle of The Bulge. Stanley was a member of American Legion Post 312, South Attleboro, MA, and served as their Chaplain for several years. Stanley was employed by Texas Instruments, Inc. Attleboro, MA, for 33 years prior his retirement. Stanley prided himself on maintaining his manicured property and enjoyed the compliments of many neighbors. He loved family and fun, and hosted many outings and holiday gatherings. Stanley was extremely proud of his military service and Polish heritage. At the family’s request, Stanley will have a private Catholic service followed by a Christian burial with military honors. He will be laid to rest at Salisbury Veterans Cemetery, Salisbury, NC. In lieu of flowers, Masses and prayer memorials, or charitable donations in memory of Stanley Krzywonos can be made to Alzheimer’s Foundation of America, 322 Eight Ave., 16th Floor, New York, NY 10001. To send the family an expression of sympathy, please visit the online guest book at www.summersettfuneralhome.com.

Stanley Krzywonos, 97, of Taylorsville, formerly of Pawtucket, RI, died on December 25, 2020. He was the beloved husband of the late Theresa (Bouchard) Krzywonos, married July 1, 1950, for 66 years. Born in Pawtucket, RI, he was a son of Polish... View Obituary & Service Information

The family of Stanley Krzywonos created this Life Tributes page to make it easy to share your memories.

Send flowers to the Krzywonos family.