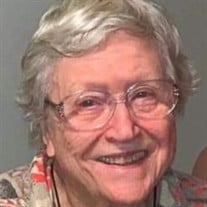 On May 4, 2022 Sophia Peacock, 92, a beautiful lady, went to sing in Heaven. Sophia Miller Poole was born April 21, 1930 to Mary Ruth Miller and Ralph Jacob Poole of East Spencer, NC. She was a loving Christian, wife, mother, grandmother and friend. Sophia, often called “Sophie”, had an older brother, Jacob, and two younger brothers, Norman and Jack. In the first grade she walked two miles to school. At age 91, she could still name the people who lived in every house along her route. She lettered on the ladies basketball team at East Spencer High School, and was Valedictorian of her senior class – the first class that required 12 years of schooling to graduate. Sophia decided not to attend college after the love of her life, J.A. Peacock, Jr. proposed. They were married at Long Street Methodist Church, her family church, and transferred their membership to Bethel Methodist church when they moved to a house on the coal road in Dukeville. J.A. Worked at Duke Power’s Buck Steam Station. They had four children: June, Joan, Jill and John – the four “J-Birds”. The family later moved to the house they built on Long Ferry Road – farmland formerly owned by her grandparents, Sophia Frick and John Miller. Sophia was a Model Homemaker. God and her family were the focal points of her life. Because she grew up in the Great Depression and World War II, Sophia was very thrifty and recycled before it was popular today – saving and reusing everything, including aluminum foil, bread bags and scrap paper. She was an excellent seamstress and tailor. Not only did she make all her own beautiful clothing, she made the clothes for her children, even the girls dance costumes, sewing at night after her children went to bed. She kept her house pretty and clean, and decorated their home with drapes, bedspreads, tablecloths – that she made of course. Sophia loved to crochet and quilt. She made each of her children and grandchildren their own quilt or afghan. Sophia was always very involved in her children’s lives – being an adult leader for the local 4-H club and summer camps, Sunday School teacher, and church youth leader. The family enjoyed summer camping at Myrtle Beach plus boating and waterskiing with other families at the Yadkin River. After the children grew up, she and her husband continued camping at the beach each year, meeting a special group of friends. After her husband died, she was self-sufficient and continued to enjoy traveling with friends and Christian Tours. She enjoyed good health until her 80’s and even had no wrinkles at 92! Later in life she enjoyed coloring books and watching westerns, old shows and game shows. Sophia also loved her grandchildren and enjoyed helping care for them. Sophia was a faithful Christian and loved her God. She supported her church with weekly attendance, offerings, and support. She held many offices on the church board and United Methodist Women and taught all levels of Sunday School and Vacation Bible School, and represented her church at Lake Junaluska conferences. Bethel’s annual chicken pie supper always required Sophia to make her secret recipe pie crust. Her children went to church even as infants, and she taught them to pray kneeling beside their beds. Sophia loved to sing and a had a beautiful soprano voice and sang in her church choir most of her life. J.A. and Sophia enjoyed singing decades in the Salisbury Singing Seniors (until the chorus disbanded). Sophia was an avid blood donor. She loved to read. In 1995 she was elected Secretary of the Duke Power Retiree Salisbury Chapter, which she continued for 19 years when she finally resigned. She was a member and officer of the County Home Extension Club and worked hard in her yard to keep it beautiful. Even after her husband J.A. died, you could drive by Sophia’s house and see her on her John Deere working in her yard. Sophia is preceded in death by her husband of 50 years, J.A., her parents, her son, John Adam III, her three brothers, son-in-law, Michael Miller, M.D. and son-in-law, Tony Harbin. Sophia is survived by her family who adored her, daughters, June Miller of Shelby, Joan Harbin of Monroe and Jill Maynor (Larry) of Spencer; grandchildren, Brad Miller (Alisa), Tracy Miller Monroe (Chris), Jim Harbin (Stacy), Joe Harbin (Angie), Tracy Maynor (Wendy), Adam Peacock and Laine Peacock; 22 great grandchildren; three great-great-grandchildren and two on the way. The family will receive friends 11 a.m. – 12 p.m. Saturday, May 14, 2022 at Bethel United Methodist Church. The funeral service will follow at 12 p.m. Burial will be in the church cemetery. In lieu of flowers memorials may be made to Bethel United Methodist Church, 2380 Long Ferry Road, Salisbury, NC 28146, Hospice of Cleveland County, 951 Wendover Heights, Shelby, NC 28150 of a charity of the donor's choice. Summersett Funeral Home is serving the Peacock family. Online condolences may be made at www.summersettfuneralhome.com.

On May 4, 2022 Sophia Peacock, 92, a beautiful lady, went to sing in Heaven. Sophia Miller Poole was born April 21, 1930 to Mary Ruth Miller and Ralph Jacob Poole of East Spencer, NC. She was a loving Christian, wife, mother, grandmother and... View Obituary & Service Information

The family of Sophia Miller Peacock created this Life Tributes page to make it easy to share your memories.

Send flowers to the Peacock family.