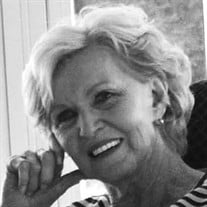 Ruby Elizabeth Carpenter Ritchie passed away on Tuesday, January 12, 2021, at Novant Health Medical Center in Salisbury, NC. She will be greatly missed by her family and all who loved her and whose lives she touched. She was larger than life with a personality that was like no other. Her beauty was breathtaking and her compassion and generosity were overwhelming. She would give you the shirt off of her back. When she walked in a room she definitely made a statement and you knew she had something to say. She desired to always find the solution to any problem and would have changed the world if she could have. She entered the hospital with an infection that led to major surgery, and during this difficult phase of recovery, she developed Covid and died from it’s complications. She fought a hard fight. Ruby was born on September 25, 1935 in China Grove, NC to the late Connie Wood Carpenter and Franklin Travis Carpenter. She was also preceded in death by her beloved husband, William Ashely Ritchie (Bill), her son, Warren Ray Ritchie and her grandson, William Nathanial Peeler, whom she adored. Also preceding her in death were her brothers Cecil Carpenter, Bernie Garrett Carpenter, Franklin Travis Carpenter, Millard Carpenter; Kinney Vance Carpenter and sister Wilma Carpenter Martin. She grew up on the Mill Village in China Grove and attended China Grove High School. After meeting the love of her life and with barely 2 pennies to rub together, they were married and started a family. That marriage lasted 62 successful years. She is now survived by her two daughters Patricia Ann Ritchie (Patty) and Kay Ritchie Peeler. She is also survived by her grandchildren, Joshua Pressley Peeler, wife Brooke, and great grandchildren, Pressley Gail and Kaleb Michael Peeler and William Madison Peeler, wife Maggie, and great grandchild, Nathan James Peeler. She adored and is survived by her nieces and nephews and their families: Johnny and Martha Carpenter, Jeanie and Wade Beaver, Dale Carpenter (deceased) and Judy Carpenter Julian, Franklin Douglas Martin, Reba Martin Poole, Beverly and Steve Shumaker, Randy and Lynn Martin; Ted and Candice Carpenter; Scott Carpenter and Susie Carpenter (who is also deceased). After her children started school, Ruby had many different jobs that she pursued. She worked in the canteen at the VA Hospital in Salisbury, Carolina Maid in Granite Quarry, where she sewed buttons on dresses and made many lifetime friends, Belk’s Department store, where she worked in fragrances and ladies dresses, and she was very proud of her job with General Electric when it first opened in Salisbury, NC. She also attended Barbizon School of Modeling in Charlotte and Broadcasting school. She was a believer in Christ and raised her family to believe that faith is the most important thing. She raised her family at Emanuel Baptist Church in Salisbury and currently was a member of First Baptist Church. The family wishes to thank the staff at Novant Regional Medical Center for its kind and expert guidance and care during her illness and for their commitment to care for patients who are sick and suffering with Covid. Their sacrifice and love to her will never be forgotten. Memorials may be made to St. Jude’s Children’s Hospital or a charity of your choice. A celebration of Ruby’s life will take place when it is safe to gather. All of her family and friends will be invited when that time comes. A memorial video may be viewed at: https://www.youtube.com/watch?v=xK0u03YZfaA Summersett Funeral Home is serving the Ritchie family. Online condolences may be made at www.summersettfuneralhome.com.

Ruby Elizabeth Carpenter Ritchie passed away on Tuesday, January 12, 2021, at Novant Health Medical Center in Salisbury, NC. She will be greatly missed by her family and all who loved her and whose lives she touched. She was larger than life... View Obituary & Service Information

The family of Ruby Elizabeth Carpenter Ritchie created this Life Tributes page to make it easy to share your memories.

Send flowers to the Ritchie family.