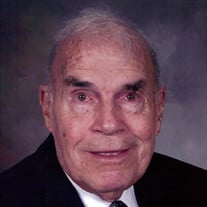 Mr. Robert Evans Goodwin, Sr. (Bob) 90, of Salisbury, passed away Wednesday, August 18, 2021 at Novant Health Rowan Medical Center. Born October 17, 1930 in Charlotte, Bob was the son of the late William Alexander Goodwin and Ethel Peterson Goodwin. He was educated in Charlotte City Schools, graduated from Central High School and graduated from UNC-Chapel Hill in 1952. Bob proudly served his country and was a veteran of the US Marine Corp serving as Captain during the Korean War. He owned and operated Goodwin Real Estate Agency in Charlotte prior to his retirement. Bob was a member of Union Lutheran Church where he was a member of the Mildred Merrell Sunday School Class and the Social Ministry Committee. He served as Master of the Joppa Masonic Lodge #530 in Charlotte, was a member of the Scottish Rite and York Rite, and served as Worthy Patron of the Order of the Eastern Star – Bethlehem Chapter # 237 along with his wife Betty who served as Worthy Matron. Bob was a member of the Men’s Breakfast Club, a member of the Military Officers Association of America, and he volunteered with the Rowan Regional Medical Center and the American Red Cross. He was very active with the Rufty Holmes Senior Center, participated in the Senior Games, and served as the NC State Ambassador of the Senior Games for Rowan County. In addition to his parents and his sister Josephine Cooper, Bob was preceded in death by his granddaughter, Kaitlin Elizabeth Goodwin on September 22, 1984, and his beloved wife Betty Fowler Goodwin on September 7, 2019. Left to cherish his memory are his son, Robert Evans Goodwin, Jr. and wife Kathy of Winston-Salem; daughters, Sandra Goodwin of Charlotte, Anna Goodrum and husband Mike of Holly Springs; his grandson, Hunter Goodwin; extended family members, Janet Garvin, Megan, Eduardo, Fiona, and Sebastian Duarte; Madison, Brad and Sadie Griffith; and many nieces, nephews, and friends. The family will receive friends 1:00- 2:00 p.m. Saturday, August 28, 2021 at the Union Lutheran Church Fellowship Hall. A celebration of Life Service will be held at 2:00 p.m. in the Church Sanctuary. Burial will follow in the church cemetery. Memorials may be made to Union Lutheran Church, 4770 Bringle Ferry Road, Salisbury, NC 28146; Shriner’s Children’s Hospital, 950 W. Faris Road, Greenville, SC, 29604; or the American Cancer Society, 1901 Brunswick Avenue, Suite 100, Charlotte, NC, 28207. Summersett Funeral Home is serving the Goodwin family. Online condolences may be made at www.summersettfuneralhome.com.

The family of Robert Evans Goodwin Sr. created this Life Tributes page to make it easy to share your memories.

Send flowers to the Goodwin family.