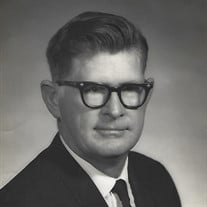 Robert Keels Cobb, 92, of Salisbury, NC passed away peacefully Sunday, March 8, 2020 at Novant Health Rowan Medical Center. He was born August 13, 1927 in Union, SC to the late James S. and Mattie Sprouse Cobb. He was educated in the High Point City Schools and took a course in Business Administration with International Correspondence School. Robert was a member of Milford Hills Methodist Church. During his life he was a Sunday school teacher for 12 years at Center Grove Lutheran Church in Kannapolis, and for Prince of Peace Lutheran Church in China Grove. He also devoted several years as Scout Master for Boy Scout Troop 93 in Kannapolis. Being a World War II Veteran, he was an active member of the Forty & Eight Voiture 115, the Salisbury Elks, the Harold B. Jarrett American Legion, and VFW Post 3006. He worked for S.H. Kress as an assistant manager for seven years. The next twelve years he spent working in the Insurance business, and then retiring from National Aluminum in 1986 with 23 years of service, with 14 of those years as Production Manager. In 1962, Robert began his rental property business. He became a successful business entrepreneur in rental properties. Being the President of Variety World, Inc, which included the property of Westside Manor Townhomes. In addition, he owned Lashstone Septic and Plumbing for 18 years. His hobbies included traveling, artifact collecting, golf, fishing, gardening, and dancing. Survivors include his wife, Sandra Harrison Cobb; his four sons, Darrell Wayne Cobb and wife Jan; Robert Neil Cobb and wife Bonnie; Raymond Dennis Cobb and Branden R. Cobb and wife Misty all of Salisbury; and daughter, Teresa Reidy of Charlotte, NC. He is also survived by seven grandchildren and one great-grandchild. The family will receive friends from 1-2 PM Thursday (March 12) at Milford Hills United Methodist Church with the Funeral service following at 2 PM in the church; conducted by Rev. Jim Parsons, Minister of Milford Hills United Methodist Church and Rev. Kelly Shrader. Burial will follow at City Memorial Park. Memorials may be made to the charity of the donor’s choice. Summersett Funeral Home is serving the Cobb family. Online condolences may be made at www.summersettfuneralhome.com.

The family of Robert Keels Cobb created this Life Tributes page to make it easy to share your memories.

Send flowers to the Cobb family.