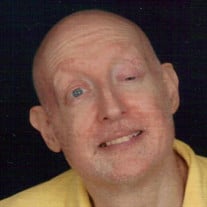 Robert “Allen” Baker, 50, of Salisbury, went to be with the Lord on Saturday, March 21, 2020. Born July 2, 1969 in Salisbury, he was the son of the late Robert “Bob” L. Baker and Dorothy Pruett Baker. He was educated in the Rowan County schools and graduated from North Rowan High School, Class of 1988. Allen enjoyed reading and going to the library. He also enjoyed music, walking and animals. He worked at Rowan Memorial Hospital for a few years. Allen was very helpful, he lived with his Mom until she passed away, then he was living with his sister, Brenda Carter until he passed. He was a very quiet man and stayed mostly to himself. Allen loved the Lord, his church, Enon Baptist Church where he was a member all his life. He was preceded in death by his mother Dorothy “Dot” Baker in 2019, his father, Robert Baker “Bob” Baker in 2008 and a sister, Ada Sue Pruett in 1960. Those left to cherish his memory are his sister, Brenda (Cliff) Carter of Salisbury; brother, Johnny W. Pruett of Salisbury. He also leaves behind numerous aunts, uncles and cousins. A private family graveside service will be conducted Thursday (Mar. 26) at Rowan Memorial Park with Rev. Jeff Kincaid, minister of Enon Baptist Church officiating. In lieu of flowers, memorials may be made to Enon Baptist Church, 1875 Enon Church Rd., Salisbury, NC 28147

The family of Mr. Robert "Allen" Baker created this Life Tributes page to make it easy to share your memories.

Send flowers to the Baker family.