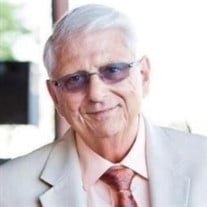 Richard Daniel Sorensen passed away on December 21, 2020, from acute respiratory failure while battling COVID-19. Richard, originally from Meriden, CT, lived in Olney, MD until retiring and moving to Salisbury, NC. In 1955, at age 12, he achieved the rank of Eagle Scout, the youngest in history at that time. This drive and motivation continued to resonate throughout his life. He was a proud Veteran and served in the Air Force from 1963-1967. After the Air Force, he worked for the State of Connecticut where he developed the State Alcoholism Treatment and Prevention Plan, the State Health Plan and State Medical Facilities Plan. In 1981, he began at the Department of Veterans Affairs where he worked as the Assistant Director for Health Resources Management, successfully moving the VA budget to electronic accounting, and later as the Manager for National Health Systems Projects leading VA hospital investigations for the VHA Medical Inspector. Richard retired from federal service in 2003 and spent most of his retirement in North Carolina on High Rock Lake. He enjoyed traveling the world, writing novels, poems, short stories and letters to the editor, carving wood, especially found wood from the lake, fishing and most importantly spending time with his family. For him, the greatest and most important gift was love. He once said, “You never know how elastic your heart is until you have children; stretching even larger with grandchildren.” He was preceded in death by his parents Daniel Sorensen and Angela Vinci and many aunts and uncles. He is survived by his wife of 50 years, Georgia Sorensen, his two daughters Erika (Terrence) Kelley and Megan (Jared) Van Vooren, his grandchildren Titus and Zane Kelley and Adalind, Lincoln and Landon Van Vooren, his siblings Daniel Sorensen (Christine Trzcinski), Robert (Carol) Sorensen and Jilda Sorensen (Alain Gagne) and many cousins, nieces and nephews. Richard will be buried with military honors during a private ceremony at Salisbury National Cemetery. A virtual memorial service will be held on January 16th. Memorial Service Program: https://drive.google.com/file/d/1qDQU57OeqxR2-Ey2LH2-75RUeYtC1_lk/view?usp=sharing Richard D. Sorensen's Memorial Service Time: Jan 16, 2021 01:00 PM Eastern Time (US and Canada) Join Zoom Meeting https://cvpcorp.zoom.us/j/99611530695 Meeting ID: 996 1153 0695 One tap mobile +13017158592,,99611530695# US (Washington D.C) +16468769923,,99611530695# US (New York) Dial by your location +1 301 715 8592 US (Washington D.C) +1 646 876 9923 US (New York) +1 312 626 6799 US (Chicago) +1 253 215 8782 US (Tacoma) +1 346 248 7799 US (Houston) +1 669 900 6833 US (San Jose) Meeting ID: 996 1153 0695 Summersett Funeral Home is serving the Sorensen family. Please visit www.summersettfuneralhome.com for details or to leave condolences.

Richard Daniel Sorensen passed away on December 21, 2020, from acute respiratory failure while battling COVID-19. Richard, originally from Meriden, CT, lived in Olney, MD until retiring and moving to Salisbury, NC. In 1955, at age 12, he achieved... View Obituary & Service Information

The family of Richard Daniel Sorensen created this Life Tributes page to make it easy to share your memories.

Send flowers to the Sorensen family.