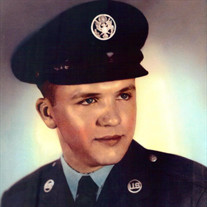 Richard Lee ‘Dick’ Polson, 84, formerly of Buffalo, New York, passed away in the peace of his home surrounded by the love and comfort of his family on August 21st, 2020. Mr. Polson is survived by his loving wife, Ann Polson (nee Campbell), Sister Grace Schmitt (the late Richard) of Buffalo, NY, and late Brother, Ralph ‘Jimmy’ Polson (Rita) of Tacoma, WA. Additionally, he leaves behind Daughters Lynn Umlauf Jacek and Diane James (Edward); Step-Daughters Carol Daley, Karen Spence (Jeffrey), and Susan Daley; and Step-Son Kevin Daley (Kathy). He was the beloved Grandfather to 12 Grandchildren and 9 Great-Grandchildren. He is preceded in death by parents Grace Seitz (nee Marison) and Ralph Polson. In addition, his first wife of 32 years, Janet Esther Polson (nee Krull), was called to Heaven in 1989 as a result of a motor vehicle accident. Richard was a proud veteran of the United States Air Force, serving in the Active and Air National Guard components from 1954-1964. He spoke fondly of his service and routinely wore his cherished Air Force shirts and hats. In civilian life, he was employed by Republic Steel/LTV Steel for 30 years. He began as a Mailroom Clerk before becoming a Payroll Accountant, ultimately climbing to the position of Paymaster; he worked for 25 years at the Buffalo location followed by 5 years in Massillon, Ohio. In his remaining years of employment, he served as a Payroll Accountant for the Harlequin Publishing Company in Buffalo before retiring in 1993. Because of his financial shrewdness, he was always looking for a discount, and when he’d get one he’d gleefully say “Such a Deal!” Dick was widely known for his humorous nature and was regarded as a ‘Class Clown’ until his final moments. It brought him great joy to lighten the mood in tough situations and put a smile on other people’s faces. One of his particularly favorite amusements was portraying the famous Pillsbury Doughboy. Keeping in line with his character, it must be said that he lived passionately by a philosophy of “Eat Dessert First - Life Is Uncertain.” One of his favorite pastimes was to take his Grandchildren and, later, Great-Grandchildren to the movies or out for ice cream. Undoubtedly, he’d fall asleep but would laugh when he got caught. On a serious note, Dick held a great respect for Mothers who worked in the food service industry; he made a point to generously tip those who served him well because he knew how hard his own Mother, a server herself, worked to take care of him and his siblings. As a Father and Grandfather, Dick worked to instill a sense of dedication, work ethic, routine, and devotion to God. As a servant-leader, Richard was a longtime member of Bethany Lutheran Church in Buffalo, occasionally preaching sermons to the congregation. Upon relocating to Salisbury, Richard quickly became a deeply respected member of Milford Hills United Methodist Church. He graciously shared his professional expertise to manage financial and administrative records for the church and the United Methodist Men, spanning nearly 2 decades. To honor his dedication and selfless service, he was formally inducted into the United Methodist Men as a Lifetime Member. In addition, he was an active member of the Chancel Choir. Furthermore, Richard was a long-serving supporter of the Meals on Wheels program, shuttling hot meals to distribution points for elderly and shut-in citizens across Rowan County. Most importantly, Mr. Polson was a pillar of faith and love in his family. Adored by the 3 generations he precedes in death, Richard brought people together and made all feel welcome. He touched innumerable lives in his 84 years and will be profoundly missed by the many he leaves behind. Memorials may be made to the United Services Organization (USO) or to Milford Hills United Methodist Church, 1630 Statesville Boulevard, Salisbury, North Carolina 28144. Summersett Funeral Home is serving the Polson family. Online condolences may be made at www.summersettfuneralhome.com.

Richard Lee &#8216;Dick&#8217; Polson, 84, formerly of Buffalo, New York, passed away in the peace of his home surrounded by the love and comfort of his family on August 21st, 2020. Mr. Polson is survived by his loving wife, Ann Polson (nee... View Obituary & Service Information

The family of Richard Lee Polson created this Life Tributes page to make it easy to share your memories.

Send flowers to the Polson family.