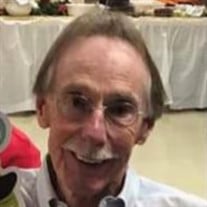 Richard Lang Kelly, 74, of Salisbury, passed away Tuesday, November 9, 2021 at Novant Health Presbyterian Medical Center in Charlotte. Born December 30, 1946 in Rowan County, he was the son of the late Lang Malachi Kelly and Lois Boots Williams Kelly. He worked at T&F BBQ while in High School and graduated from Boyden High School in 1966. Following high school, he served in The US Marine Corps after which he attended Appalachian State University graduating with a Bachelor of Technology. He was employed with the City of Salisbury for 38 years, retiring as Director of Risk Management. He was given the Key to the City when he retired in 2015. He was also awarded the Richard L. Kelly Award in recognition of his contribution to Risk Management and Safety for all citizens and employees of the City of Salisbury and to this day the award is still named after him. In 2008 the Salisbury Post ran an article about him and called him “Salisbury’s Running Man”. He was a member of Landmark Church where he served as Sunday School Teacher, Sunday School Superintendent, Lay Speaker, co-chair of the Board of Deacons and on the Finance Committee Chair. His hobbies included street rods and motorcycles, especially his 1932 Ford hot rod and his two Harley Davidson motorcycles. He was an avid movie enthusiast and was always willing to help anyone in need. In addition to his parents he was preceded in death by his first wife, Sandy W. Kelly. Left to cherish his memory are his wife of eight years, Gloria Jane Pleasants Kelly; sons, Michael Kelly of Charlotte, Rick Kelly (Wendy) of Charlotte; sister, Donna Roddy of Lexington; brother-in-law, Will Pleasants (Starr) of Salisbury; two grandchildren; and his fur baby, Cody Boy Kelly. The family will receive friends 1:30 p.m. – 3:00 p.m. Sunday, November 14, 2021 at Landmark Church. The funeral service will follow at 3:00 p.m. with Pastor Mike Robinson officiating. Burial will be in City Memorial Park. In lieu of flowers memorials may be made to Landmark Church, 1910 Mooresville Road, Salisbury, NC 28147 Summersett Funeral Home is serving the Kelly family. Online condolences nay be made at www.summersettfuneralhome.com.

The family of Richard Lang Kelly created this Life Tributes page to make it easy to share your memories.

Send flowers to the Kelly family.