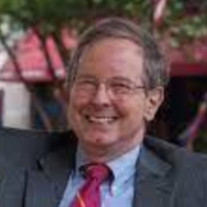 Richard (Dick) Long Huffman, Jr. left this life too early, at the age of 72, on Saturday morning, January 29, 2022. The world is a better place in so many ways because he was here. Dick was born to Richard and Kitty Huffman on November 6, 1949 in Charlotte, NC, where he experienced something of a Leave it to Beaver childhood. He graduated from Myers Park High School in 1968, and then made one of the best decisions of his life by choosing to spend his next four years at Lenoir-Rhyne College. It was there that he came into his own and his talents took off: he began developing his considerable skill of reasoned thinking and discourse (Carolina Debate Conference champion, outstanding debater), his joy in camaraderie ((Theta Chi fraternity), his leadership ability (class officer as well as student body treasurer), his business acumen (business manager of student newspaper) and his love of lifelong learning (Dean's List). He graduated in 1972 with a degree in business administration. His gratitude for all that Lenoir-Rhyne gave him carried over into all his adult years, serving both on the University Alumni Association (chair 2010) and the Lenoir-Rhyne Board of Visitors (chair 2017). Like all lives, Dick's had several defining moments that structured and enriched his adult years. First and foremost was his marriage to the woman he unfailingly called "my beautiful bride". His 38-year partnership with Dale Palmer Huffman was one of devotion, adventure and community. Among many things they shared was a love for historic homes, and Dick's passion for historic preservation has been evidenced by the restoration and care of their West Square home in Salisbury. Another defining moment in Dick's life was his decision to go to law school. After working for five years at Duke Power in Charlotte, while also working toward his MBA degree at UNC-C (which he obtained in 1977), he began law school at Wake Forest University School of Law. He graduated in 1981 and practiced for the next twenty some years both in Charlotte and later at Wallace and Graham in Salisbury. He developed an expertise in occupational diseases/injuries, particularly asbestos-related cases: he tried and won the first mesothelioma case to ever be heard by the North Carolina Court of Appeals. But it was when he opened his solo practice in 2005, specializing in workers’ compensation and social security disability, that his mark on the world was embedded. Dick was a zealous advocate for those who had not gotten a fair shake at life, be it from injury, health condition, racial discrimination or just life’s circumstances. He assisted hundreds of individuals to obtain the social security benefits they deserved and hundreds more to obtain workers’ compensation benefits. Very often, all that stood between an injured worker and living in a car was Dick Huffman. He practiced his craft in a quiet, unassuming manner, but woe to opposing counsel who took his calm demeanor as a weakness. He was fierce in his devotion to his clients and knew the law inside and out. His passion for his work and his concern for his clients was evident while he was in hospice care at home; he worked from his hospital bed up until the day he died. Yet another defining moment in Dick’s life was the decision to move from Charlotte to Salisbury. Salisbury and Rowan County became a focus of his time and talents, and there was hardly a cultural or social justice organization in Salisbury that Dick’s hands didn’t touch. His time and talents enhanced the quality of life in his community on so many levels. He served on the Rowan Museum Board of Directors, the Historic Preservation Commission, the Historic Salisbury Foundation and Rowan Rotary Club. He was also on the boards of the Community Care Clinic and Rowan Helping Ministries. As a staunch Democrat, he truly believed that those who had been blessed should fairly be asked to share some of those blessings with the less fortunate. This he did, in his quiet way, with a glad heart. Dick is survived by his wife Dale, his sister Marsha Tarte (husband Bob) of Cumberland, MD, his brother-in-law and sister-in-law Jeff and Donna Palmer of New London, two nieces Tiffany Palmer and Caitlin Hudgins. A memorial service will be held 11 a.m. Monday (Feb. 7) at St. John’s Lutheran Church. Visitation will follow the service. In lieu of flowers, contributions in Dick’s name can be made to Lenoir-Rhyne University, P.O. Box 7467, Hickory, NC 28603, noting “Huffman Speaker Series for Social Justice” in the memo line. Dick was able to combine two of his biggest loves in creating this program at the university, and his spirit will live on through his series as well as through all the lives he touched. Summersett Funeral Home is serving the Huffman family. Online condolences may be made at www.summersettfuneralhome.com.

Richard (Dick) Long Huffman, Jr. left this life too early, at the age of 72, on Saturday morning, January 29, 2022. The world is a better place in so many ways because he was here. Dick was born to Richard and Kitty Huffman on November... View Obituary & Service Information

The family of Richard "Dick" Long Huffman Jr. created this Life Tributes page to make it easy to share your memories.

Send flowers to the Huffman family.