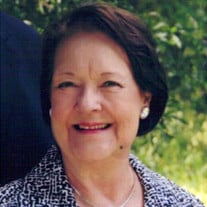 Rebecca Jane Barber Floyd was born June 17, 1936 to loving parents, Richard Wainwright Barber and Winifred McCanless Barber. She was very proud of her family heritage in this country, which goes back to Dr. Luke Barber who came to Maryland from Yorkshire, England in 1654. Dr. Barber was Oliver Cromwell’s personal physician, distinguished himself in the Battle of the Sevren, and served as deputy governor of the colony of Maryland. Dr. Barber’s great-grandson Elias came to western Rowan County in 1794 and established Barber farm which remains in the family to this day. Rebecca was a member of the Daughters of the American Revolution, the Order of the First Families of Maryland, the Daughters of the Founders and Patriots of America and the Sons and Daughters of Antebellum Planters. Rebecca graduated as Salutatorian of her Cleveland High School Class of 1954. She graduated with honors from Pfeiffer College in 1958, and then taught the fifth grade in Hillsborough to support her husband, Charles while he was in school at Chapel Hill. They married in August 1958 and remained married until the time of his death. She supported Charles in his career at the University of Georgia for forty years and served as Treasurer of the University Woman’s Club. Rebecca was an ardent preservationist, particularly in the preservation of the Richard Wainwright Barber Farm. With her sister, Joyce Ann, she gave a conservation easement to the Land Trust for Central North Carolina which insures that the farm will remain only in agricultural use and cannot be subdivided. She gave further conservation easement on eighty acres of hardwoods to establish the Joyce Ann Barber Heritage Forest to honor her sister which insures that none of the trees will be cut and the land remains in its natural state. She established the Richard Wainwright Barber Farm Preservation Trust to help preserve the farm in perpetuity. In recognition of her efforts, she received the National Daughters of the American Revolution Conservation Medal nominated by the Elizabeth Maxwell Steele Chapter in Salisbury, A Historic Preservation award from Historic Salisbury and an Award of Merit from Preservation North Carolina. Rebecca will be buried at Christ Episcopal Church, for which the family gave the land for its establishment, alongside with others of her family back to Elias. In addition to her parents, she was preceded in death by her husband Charles Frederick Floyd on October 15, 2020 and her sister, Joyce Ann Barber on November 27, 2012. A Memorial Service will be conducted 2 PM Saturday (July 10) at Christ Episcopal Church with Rev. Sarah Blaies officiating.

Rebecca Jane Barber Floyd was born June 17, 1936 to loving parents, Richard Wainwright Barber and Winifred McCanless Barber. She was very proud of her family heritage in this country, which goes back to Dr. Luke Barber who came to Maryland from... View Obituary & Service Information

The family of Rebecca Jane Barber Floyd created this Life Tributes page to make it easy to share your memories.

Send flowers to the Floyd family.