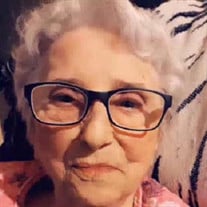 Ramona Darlene Burch Boone, 91 of Spencer passed away Friday, April 10, 2020 at her home. Born October 15, 1928 in Salisbury, she was the daughter of the late Burris Benjamin Burch and Elizabeth Mae Loomis Hoskins Burch. She was educated in the Spencer schools. Earlier in her life she worked at Krider’s Café in Spencer and was a homemaker. Mrs. Boone was of the Baptist faith and was a former member of Trinity Baptist Church. Affectionately known as “Granny Boone” by the “Spencer Kids”, she was always willing to invite them into her home and feed them. In addition to her parents, she was preceded in death by her first husband, Clyde Benjamin Baker, Sr., her second husband, Arus Henry James Boone on January 2, 1981, a son, Clyde Benjamin Baker, Jr. on February 14, 2020 and her nine brothers and sisters. Those left to cherish her memory are her sons, Aaron Henry James Boone and Bill Bodie Boone of the home, daughters, Sherri Elizabeth Boone of the home and Debra Boone McLaughlin and her partner, Ronnie Norris of Salisbury; Charlotte Davis of Salisbury, who was raised as a daughter in the home; daughter-in-law, Brenda Baker of Spencer; grandchildren, Heath Baker, Bonnie Harrell (Will) all of Salisbury, Cain Baker (Stephanie) of Mocksville, Chad Baker (Leah) of Granite Quarry, Zackery McLaughlin, Trista McLaughlin and Zebulon McLaughlin all of Spencer; nineteen great-grandchildren and one great great-grandchild. A private family graveside service will be conducted at City Memorial Park with the Rev. Terry Smith, minister of Smith Grove Baptist Church officiating. Memorials may be made to St. Judes Children’s Research Hospital, 262 Danny Thomas Place Memphis, TN 38105 or Faithful Friends, 220 Grace Church Rd, Salisbury, NC 28147.

Ramona Darlene Burch Boone, 91 of Spencer passed away Friday, April 10, 2020 at her home. Born October 15, 1928 in Salisbury, she was the daughter of the late Burris Benjamin Burch and Elizabeth Mae Loomis Hoskins Burch. She was educated in... View Obituary & Service Information

The family of Mrs. Ramona Darlene Burch Boone created this Life Tributes page to make it easy to share your memories.

Send flowers to the Boone family.