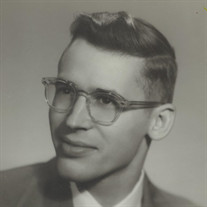 Ralph Charles Siegmund departed for heaven on good Friday April 15, 2022 after a long and full life at the age of 91. Ralph was born on December 20, 1930 to a print shop owner and a stay-at-home mother in Aurora, IL. He was the youngest of four siblings and though he grew up in the era of the Great Depression, his childhood was filled with wonderful experiences. His father built the children stilts, games, and a zipline that ran from the barn to the “pool”. Ralph also enjoyed fishing with his dad and playing with his pets, especially his chicken, Cross Beak. Ralph came to know Jesus as his personal Lord and Savior at a young age, which changed the course of his life. Another life altering event impacted him as a young adult. He contracted polio which left him with a paralyzed ankle. Still, this did not keep him from enjoying the outdoors and a full life. He loved gardening, biking, swimming, fishing, and camping. Ralph attended Moody Bible Institute and later the University of Illinois where he completed his master’s degree. While at UIUC, he met Geneva Ann Siegmund. They married on June 28, 1973, and had two daughters, Julie Anne in 1977 and Cindy Lynn in 1979. Eventually they settled in Salisbury, NC where Ralph worked as a guidance counselor and teacher, later ran the school’s maintenance program, and operated a tree removal business. After his retirement, he enjoyed spending time with his family, especially celebrating holidays and birthdays over a shared meal. He lived with his daughter Cindy’s family and spent these years reading, enjoying his grandchildren, and watching movies or Big Ten basketball. Although people skills were never his strength, he loved the Lord and his family deeply and spent time daily in prayer and Bible study. He was passionate about missionary work and sharing the good news of Jesus in hopes of seeing others’ lives changed through God’s forgiveness and grace just as his life was changed. Ralph was often seen handing out tracts and volunteered for many years in prison ministry. He was generous, supporting missions and outreach ministries throughout his life. He showed his devotion best to his wife when she was moved into a nursing home. He visited almost daily for her remaining seven years, sitting by her bedside, feeding her lunch, and reading to her. Geneva proceeded him to heaven in 2015. His parents Charles Bertrum Siegmund and Iva Ursala Collins Siegmund and siblings Lillian Blacksmith, Laura Lewis, and Howard Siegmund also proceeded him in death. He remains loved and remembered by his daughters Julie Siegmund and Cindy King as well as his son-in-law Philip King and four grandchildren, Dakota Siegmund and Evan, Ella, and Eric King. The family will receive friends from 1–2 p.m. Saturday (April 23rd) at Summersett Funeral Home. The funeral service will follow at 2 p.m. in Summersett Memorial Chapel with Reverend Rod Kerr officiating. Burial will follow at City Memorial Park. Memorials may be made to Wycliffe Bible Translators (P.O. Box 628200, Orlando, FL 32862 or at wycliffe.org) or to AbolitionNC (P.O. Box 4011, Greensboro, NC 27404 or at AbolitionNC.org). Summersett Funeral Home is serving the Siegmund family. Online condolences may be made at www.summersettfuneralhome.com

Ralph Charles Siegmund departed for heaven on good Friday April 15, 2022 after a long and full life at the age of 91. Ralph was born on December 20, 1930 to a print shop owner and a stay-at-home mother in Aurora, IL. He was the youngest of... View Obituary & Service Information

The family of Ralph Charles Siegmund created this Life Tributes page to make it easy to share your memories.

Send flowers to the Siegmund family.