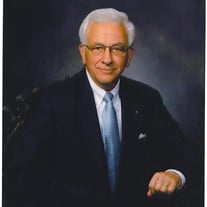 On Friday, October 30th, Paul Edward Fisher “flew away” into the loving arms of God surrounded by his family and the caring staff of the Glenn A. Kiser Hospice House. Mr. Paul (as he was known by most) had been in declining health over the past year…not that you would have noticed based on his relentless drive to be useful. Mr. Paul was born in Granite Quarry to Jacob Eli (J.E.) and Pearl Walton Fisher on November 15, 1937. Following the death of his birth mother when he was 14 months old, Paul was blessed with a second mother following the marriage of his widowed father to Dorothy Irene Peeler. He graduated from Granite Quarry High School and in 1960, from the University of North Carolina at Chapel Hill. He was a lifelong Tarheel fan having experienced a basketball National Championship in his freshman year. After graduation, Paul married the love of his life, Kirby Sue Palmer of Spencer, NC. Their marriage would last over 60 years. Mr. Paul went to work for Farmers & Merchants Bank in Granite Quarry in 1960. Following the death of his father in 1972, he became the President of the bank at the age of 34, and later Chairman and CEO. He served the bank for 60+ years, most recently as Chairman Emeritus and the Chairman of the F&M Foundation. As a banker, he loved helping people fulfill their dreams and gave them hope for a better tomorrow. He saw community banking as an opportunity to improve the quality of life for all his clients and the communities he served. Mr. Paul cherished the role of community volunteer. He worked tirelessly on many community projects. His love for this work was only outshined by his love of people. Mr. Paul never met a stranger and had a gift for making a person feel as they were the only person in the room that mattered. He loved music, but he couldn’t carry a tune. Fortunately, that did not stop him from “butchering” hymn after hymn with his great friends in the Everyman’s Bible Class at First Presbyterian Church. Mr. Paul was a gifted storyteller with an impressionist approach to the English language. If Picasso were a poet he would have been Mr. Paul. “Paul-isms” always added a dose of clarity and humor to any discussion. You may not have known what he was saying, but you always knew what meant. He used analogies the same way a sculptor uses a chisel, to reveal a deeper meaning that you simply couldn’t see from the surface. Mr. Paul grew up shy with a slight stutter. He overcame these obstacles with practice and a little help from Dale Carnegie (cue Mr. Paul’s relentless recommendation of the book – How to Win Friends and Influence People - a book he recommended to his nurses two days before he passed). Mr. Paul always wanted to leave the world a little better than he found it. When he received his cancer diagnosis (less than 24 hours before his death), his first words were “Well, I’m not going to get to walk through the park.” He was referring to the Bell Tower Green Park that is currently under construction in Salisbury. The same park that Mr. Paul had spent the last few years trying to raise money to complete. “No worries,” he said, “I was never sure I’d see it when I started raising money for it, but people are going to love it.” That drive to plant a tree under whose shade he will never sit is probably the most telling attribute of Mr. Paul. Mr. Paul had a keen financial mind and a love for the Banking Industry, but his most valuable asset was his wife Sue. Over their 60 years of marriage, they had two children and 10 grandchildren. They formed a lifelong partnership of love and mutual respect. Over his almost 83 years of life, Mr. Paul had a very simple recipe for life – Show Up, Find A Way To Be Useful, and Love With All Your Heart. Thank you to the people of Rowan County and surrounding communities for offering him your friendship, helping him along life’s path, challenging him to be better, and picking him up when he fell. Because of you…it truly was A WONDERFUL LIFE. Mr. Paul was preceded in death by his brother Jacob Eli Fisher II, his sister Charlotte Fisher Eller and husband Vance, his sister Sally Fisher Peeler and husband Doug, his sister Jean Fisher McCombs and husband Eugene, and sister-in-law Mackie Ann Honeycutt and husband Chuck. Those left to cherish his memory are his wife, Sue Palmer Fisher, his sister Dorothy Fisher Mitchell and husband Don, his brother John Marshall Fisher and wife Joy, and sister-in-law Phyllis Loflin Fisher. He is also survived by his son Jacob Steven Fisher and wife Robin, and their children Paul Edward “Banks” Fisher II, Maxwell Hunter Fisher, and Jackson Ennis Fisher, and his daughter Paula Fisher Philpot and husband Irvin and their children Irvin Henry “Bo” Philpot IV and wife Rachel, Kirby-Annah Philpot, HopeEllen Philpot Turner and husband Alan, PollyRose Fisher Philpot, SamcieJoe Philpot Barrett and husband Carson, Paul Henry “Bubba” Philpot, ElizaPearl Walton Philpot. Due to coronavirus protocols, a private family memorial service was held on Monday, November 2, 2020 at First Presbyterian Church of Salisbury, followed by a graveside service at Chestnut Hill Cemetery. As an expression of sympathy, the family requests in lieu of flowers that memorial gifts be made to The Bell Tower Green Park at belltowergreen.com or Bell Tower Green, Inc., 141 E. Council Street, Salisbury, NC 28144. You may also contact Mary Heather Steinman at The Bell Tower Green Park at 704-637-0511. Summersett Funeral Home is assisting the family with all funeral arrangements. Online condolences may be made at www.summersettfuneralhome.com.

On Friday, October 30th, Paul Edward Fisher &#8220;flew away&#8221; into the loving arms of God surrounded by his family and the caring staff of the Glenn A. Kiser Hospice House. Mr. Paul (as he was known by most) had been in declining health... View Obituary & Service Information

The family of Paul Edward Fisher created this Life Tributes page to make it easy to share your memories.

On Friday, October 30th, Paul Edward Fisher “flew away” into...

Send flowers to the Fisher family.