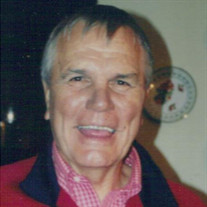 On Tuesday, December 29th, Ned Alton Storey passed peacefully at the age of 83. Ned had been in declining health over the past several years, but strength of will and a team of talented physicians allowed him to attend his granddaughter’s wedding this fall, and also celebrate his grandson finishing graduate school and getting his first job. Ned was born in Norwood, NC to John and Mary Storey on October 30, 1937. The family moved to Salisbury when he was 3 years old. Ned was on the baseball and football teams at Boyden High School, graduating in 1956. He was President of the Student Association and voted Best All Around by his senior classmates. He was also a member of the baseball and soccer teams at Pfeiffer College, before transferring and graduating from Catawba College in 1962 with a degree in Business Administration. Ned was also a member of the 1955 American Legion World Series team. Ned married Mary Shull Tarman in 1965. He always jokingly told his grandchildren that he met Shully after walking past the church at Wake Forest and hearing her singing, but they actually met on a blind date. They were blessed with one son - Ned Andrew Storey. Ned was the first employee of Carolina Color Corporation and traveled throughout the U.S. helping to grow the business as head of Sales. Health issues forced retirement after 22 years. Ned also led a life of example in service to both church and community. Early in his years of volunteer work Ned served as the General Chairman of the National Sportscasters and Sportswriters Association and helped coordinate the annual awards ceremony for many years. He was a long tenured member of First United Methodist Church of Salisbury and held multiple leadership positions at the Church. He also served on the Board of Directors for Habitat for Humanity and led the building campaigns of multiple Habitat homes sponsored by FUMC Salisbury. He was a Member of the first Board of Trustees of Hood Theological Seminary and was instrumental in leading the fundraising campaign that resulted in the Seminary establishing the move to its current campus. His dear friend Dr. Albert Aymer awarded Ned an Honorary Doctorate Degree in recognition of his contributions. Ned was also on the Board of Directors of Rowan Helping Ministries. Ned was especially known for his quick wit and humor, and his passion for golf. He had three holes in one in his lifetime, and was an avid golfer until declining health forced him to enjoy golf through his hobby of collecting and trading golf clubs. He was a frequent visitor of the team at the Warrior Golf Club pro shop. Ned is survived by his wife of 55 years, Mary (Shully) Tarman Storey, his son Ned Andrew Storey and wife Diana Storey, his granddaughter Katelyn Storey Lee and husband Alex Lee, and grandson Spencer Andrew Storey. Ned is also survived by his brothers Ron (wife Frieda) Storey and Roger Storey. The family acknowledges with great appreciation the many years of support received by Ned’s very talented physicians, including Neil Patel, MD, Brian Fazia, MD, and Ned’s life-long dear friends and neighbors Dr. Myron Goodman and Mary Goodman. Ned’s ability to cheat death more than once over the past several years is a testament to not only his determination, but their expertise and skill. A memorial service will be held for family. In lieu of flowers memorials can be shared with First United Methodist Church, 217 S. Church Street, Salisbury, NC 28144 or Hood Theological Seminary, 1810 Lutheran Synod Drive, Salisbury, NC 28144. Summersett Funeral Home is serving the Storey family. Online condolences may be made at www.summersettfuneralhome.com.

On Tuesday, December 29th, Ned Alton Storey passed peacefully at the age of 83. Ned had been in declining health over the past several years, but strength of will and a team of talented physicians allowed him to attend his granddaughter&#8217;s... View Obituary & Service Information

The family of Ned Alton Storey created this Life Tributes page to make it easy to share your memories.