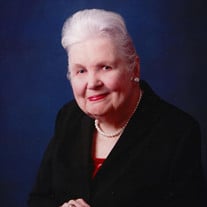 Nancy Gray Coughenour Nicholes, 103, of Salisbury, passed away peacefully on Thursday, January 27, 2022 at her residence. She was born on July 19, 1918 in Brooklyn, New York, where her father was stationed during World War I. Four months later, after the war ended, she returned with her parents, William Chambers Coughenour and Ruby Gray Coughenour, to Salisbury. She graduated from Boyden High School in 1935 and attended the University of North Carolina at Greensboro from 1935 – 1937, when she transferred to the University of North Carolina at Chapel Hill. There she met Postell Mood Nicholes, Jr., whom she married in Saint Luke’s Episcopal Church on December 27, 1938. After his death in 1960, she returned to UNC part time and earned her bachelor’s degree in English in 1972. She also worked as an administrative assistant in the admissions office at Princeton University for over 25 years, retiring in 1988. In 1990, she returned to the house where she grew up in Salisbury and lived there happily until her death. She was an enthusiastic bridge player, avid reader of novels and biographies, and a member of the Travelers’ Club. Until she was 87 she traveled regularly with her sister, friends and UNC alumnae groups to Europe. She was a longtime member of Saint Luke’s church. She was preceded in death by two daughters, Carol Nicholes Brown and Elizabeth Gray Nicholes, her brothers William Chambers Coughenour, Jr. and Richard Chambers Coughenour, and her sister Ann Coughenour Boyd. She is survived by a daughter, Nancy Nicholes Goodrich, and a son, Postell Mood Nicholes III, eleven grandchildren and fourteen great grandchildren. A Private Graveside Service was held on Monday, January 31 at Chestnut Hill Cemetery, with the Reverend Doctor Robert Black, Rector of Saint Luke’s Episcopal Church, officiating. Later this year, we will celebrate her remarkable life at a memorial service to be held at St. Luke’s church. In lieu of flowers, donations in her memory may be made to Saint Luke’s Episcopal Church, 131 W. Council St., Salisbury, NC 28144, or the organization of your choice. Summersett Funeral Home is serving the Nicholes family. Online condolences may be left at www.summersettfuneralhome.com.

Nancy Gray Coughenour Nicholes, 103, of Salisbury, passed away peacefully on Thursday, January 27, 2022 at her residence. She was born on July 19, 1918 in Brooklyn, New York, where her father was stationed during World War I. Four months... View Obituary & Service Information

The family of Nancy Coughenour Nicholes created this Life Tributes page to make it easy to share your memories.

Send flowers to the Nicholes family.