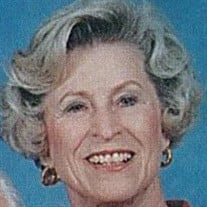 Mary Culp Spires, 96, a resident of Brighton Gardens in Charlotte, passed away on June 6, 2020. She was born in Badin, NC on February 15, 1924, to the late Arlie Franklin Culp and Frances Smith Culp. Mary graduated from Badin High School as valedictorian and from Pfeiffer Junior College where she was awarded The Order of the Sundial, Pfeiffer's highest award for student service, engagement, and leadership. She continued her education at Appalachian State Teachers College, graduating with highest honors and serving as editor of the yearbook. Mary taught junior high school in the Albemarle City Schools and, after moving to Salisbury, was a Title 1 reading teacher in the Rowan County School System. Her devotion to teaching continued throughout her life. She was a gifted storyteller and often entertained and taught her grandchildren and their friends with creative and amusing tales. As a member of First United Methodist Church in Salisbury, Mary served on the Administration Board and as president of the United Methodist Women. She was a member of the Daisy Hedrich Sunday School Class and sang in the Chancel Choir. In 1994, Mary married the late Clarence E. Spires (CE) and became a member of Haven Lutheran Church where she served as president of Women of ELCE, sang in the Chancel Choir, and was a member of the Walt Wagoner Sunday School Class. She was a talented writer and wrote the first published history of Haven Church. Mary was active in the Wednesday Bridge Club, her book club, and the Story Telling League. She enjoyed traveling and gardening with CE, cooking wonderful meals, reading, and growing and arranging flowers. Mary loved her God, family, and friends. She will be remembered for her kindness to all, her calm and gracious manner, her gift of listening, her agreeable nature, and, of course, for her sense of style; dressed to a T and color-coordinated from earrings to shoes to purse. She was devoted to CE and found her deepest joy in her family. She was her grandchildren’s beloved Mimi. In addition to her parents and husband, Mary was preceded in death by her four sisters and a brother. Mary is survived by her sons, James Allen Hinson (Jack and Linda), Joseph Franklin Hinson (Lynn), and Jonathan Cordell Hinson (Kris); grandchildren, Mary Julia Walker, Anna Menser, Jack Hinson, Jenna Hinson, Beth Hinson, Sally Hinson, Ben Hinson, Abby Hinson, Jayne Hinson, Kelsey Manzano, and Christopher Manzano; and five great-grandchildren. The family expresses its deep gratitude to Mary’s devoted caregivers at Brighton Gardens who, in addition to care, provided love and support, and to Hospice and Palliative Care Charlotte Region. A private graveside service will be held on Wednesday, June 10, at Rowan Memorial Park in Salisbury. Memorials may be sent to Haven Lutheran Church, 207 W Harrison Street, Salisbury, NC 28144 or to the charity of one’s choice. Funeral arrangements are in the care of Summersett Funeral Home and Cremation Center of Salisbury. Online condolences may be made at www.summersettfuneralhome.com.

Mary Culp Spires, 96, a resident of Brighton Gardens in Charlotte, passed away on June 6, 2020. She was born in Badin, NC on February 15, 1924, to the late Arlie Franklin Culp and Frances Smith Culp. Mary graduated from Badin High School as... View Obituary & Service Information

The family of Mary Culp Spires created this Life Tributes page to make it easy to share your memories.

Mary Culp Spires, 96, a resident of Brighton Gardens in Charlotte,...

Send flowers to the Spires family.