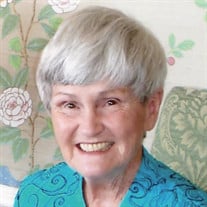 Mary Drinkard Key, the matriarch of a large and extended family, died Oct. 19 at home in Salisbury, NC, after an apparent heart failure. She was 91. Her family and friends long marveled at her energy, care for others, and boundless interest in the world around her. Her life was a constant stream of invention and re-invention -- from the loss of both parents at age 13, through boarding schools and college to marriage to a husband who was an attorney-turned-Presbyterian minister. That led to 30 years of moves to churches spread across Virginia, North Carolina and Tennessee, each one a new adaptation and an opportunity for new friends. But it didn’t stop there. After losing her husband, James E. Drinkard, to cancer in 1996, she began attending a grief support group at church with another congregation member, Jesse A. Key, who had lost his wife, Jane. They were married a year later, moving to Farragut, TN, and their merged family grew even larger. It all started with an American Army artillery officer, Marion Penn, who deployed to France in WWI and returned to marry a French wife, Françoise Renée Appoline Besnard. Mary was the first of their four children. When both parents died within six months of each other in 1942, Mary went to Knoxville to live with an uncle and aunt, while her three siblings moved to live with family in Texas. Mary grew up hearing French spoken at home, and as a child she spent a year with family in France, going to school there. It started a language “bug” that lasted a lifetime. At Randolph Macon Women’s College in Lynchburg, VA, she was called on because of her language skills to help host French intellectual and writer Simone de Beauvoir on a 1947 campus visit and lecture tour. As a beloved high-school French teacher in Greensboro, her commuting vehicle was a Renault “Le Car,” and she organized trips to France for her students. In Knoxville, she decided to take up Italian to add to her language portfolio. And at her last home at the Trinity Oaks retirement community in Salisbury, she started conversational language groups for speakers of French and Spanish. She had met husband Jim, a law student at the University of Virginia, on a blind date while in college. They married in 1950 and moved to Bristol, VA, where he started a law practice and they started a family. But after five years the couple felt a different call, and moved to Richmond where Jim attended Union Theological Seminary. He was called to pastorates at Presbyterian churches in Woodstock and Glade Spring, VA; Greensboro, NC, and Strawberry Plains, TN. In each, Mary played key roles as a hostess, a musician, a Sunday School teacher and a consummate gatherer of people. That gathering instinct was perhaps best represented by her attention to her now far-flung family. She started a periodic family reunion for her clan that persists to this day, continued by her children. She was herself a voracious student and reader. While in Glade Spring, she earned a Master’s Degree by commuting to Appalachian State University in North Carolina. She seemed to always be in motion, whether taking vacations in the woods with six children in a three-room tent, handing out loaves of homemade banana bread to church members or filling a freezer and a pantry with vegetables from the family garden. She taught line-dancing classes into her 80s. In Farragut with husband Jess, a mark of Mary’s lasting devotion to the church was her election as a member of the its governing body, where she was in charge of welcoming new members, among other duties. Moving to Salisbury and Trinity Oaks, she quickly made new friends and started a weekly sing-along around a piano. And even then, she continued to out-dance far-younger guests at grandchildren’s weddings. Husband Jess died in 2019. Mary leaves a big family in her wake: her children and their spouses, Jim and Kathy Drinkard of Springfield, VA; Deborah and Harold Houghton, of Richmond, VA; Steve and Lina Drinkard and Mike and Gail Drinkard, all of Salisbury, NC; Kathy and Scott McIndoe, of Bowie, MD; and Carol and Gerry O’Loughlin, of Stoneham, MA. Her expanded family includes Jess’ children and spouses: Carol and Tim Brown of Marshall, NC; Susan and Scott Conrad, of Asheville, NC; Kenneth and Robin Key, of Kona, HI; Steven Key, of Carrollton, TX. All told, there are 18 grandchildren and eight (soon to be nine) great-grandchildren, as well as a “brother”, Dick Ince, and his wife Ann of Knoxville, sister-in-law Elaine Wilcox of Stuarts Draft, VA, and many nieces, nephews and cousins on two continents. Memorial gifts in Mary’s memory may be made to John Calvin Presbyterian Church, 1620 Brenner Ave., Salisbury, NC 28144. Summersett Funeral Home in Salisbury is in charge of arrangements, and online condolences may be made at www.summersettfuneralhome.com. A virtual memorial service through ZOOM will be held Saturday, November 14, 2020 at 11:00 AM. To participate please request an invitation from John Calvin Presbyterian Church at [email protected]

Mary Drinkard Key, the matriarch of a large and extended family, died Oct. 19 at home in Salisbury, NC, after an apparent heart failure. She was 91. Her family and friends long marveled at her energy, care for others, and boundless interest... View Obituary & Service Information

The family of Mary Drinkard Key created this Life Tributes page to make it easy to share your memories.

Mary Drinkard Key, the matriarch of a large and extended family,...

Send flowers to the Key family.