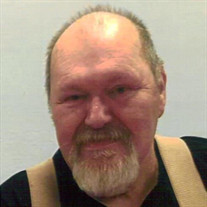 Lloyd Lonon “Bo” Buff, Jr., 71, of Salisbury, passed away Saturday, January 9, 2021 with his family by his side. Born May 18, 1949 in Rowan County he was the son of the late Lloyd Lonon Buff, Sr. and Peggy Marie Davis Buff. In better health he enjoyed fishing, hunting, raising chickens, gardening, spending time with his grandbabies and his fur baby Sasha. In addition to his parents, he was preceded in death by a son, Robert Allen Buff; sister, Laura Buff Brown; brothers-in-law, Wayne Earnhardt and Toby Brown. Left to cherish his memory are his wife of 42 years, Kathy Earnhardt Buff; sons, Lloyd Lonon Buff, III, Kevin Paul Buff; daughter, Amanda Dawn Buff Propst (Jesse); grandchildren, Jackson, Andrew and Ivy Propst; special Aunt JoAnn Reid; brothers-in-law, Eddie Earnhardt (Diane), Larry Earnhardt (Bonnie); and sister-in-law, Amie Jean Earnhardt. The funeral service will be conducted at 4 p.m. Wednesday, January 13, 2021 at Friendship Baptist Church (100 Porter Road, Salisbury, NC 28146) with Rev. Jason Pierce officiating. Mr. Buff will lie in state for one hour prior to the funeral service. Due to Covid-19 restrictions we ask that you wear a mask and honor social distancing. At other times the family will be at the daughter’s residence. The family would like to thank Novant Hospice for their kindness in his final days. Memorials may be made to the National Kidney Foundation, 316 Lake Drive, Salisbury, NC 28144. Summersett Funeral Home is serving the Buff family. Online condolences may be made at www.summersettfuneralhome.com.

The family of Lloyd Lonon Buff Jr. created this Life Tributes page to make it easy to share your memories.

Send flowers to the Buff family.