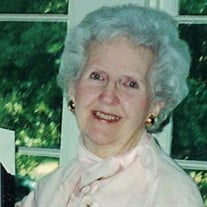 Lillian Earle Clarke James, age 103, of Charlotte, NC, passed away on August 20, 2020. She was born at the Roseville Plantation in Florence County, SC, to the late James H. Clarke Sr. and Sula Wade Clarke. She was pre-deceased by her husband, Jon Patrick James, her sister, Ada Clarke Deery of Lake City, SC, brothers James H. Clarke, Jr and W. H. "Bill" Clarke of Florence, SC and John W. Clarke of Macon, Georgia. Also, a sister-in-law, Margaret Clarke of Florence, SC. Mrs. James was born on the Roseville Plantation outside of Florence, SC. Roseville Plantation was in existence before the Revolutionary War and is a registered historic landmark. Roseville was owned by Lillian's family for nearly 125 years, being sold in 1948. Lillian lived an extraordinary life while growing up with her four siblings on a working farm and were completely self-sufficient during her early childhood. Mrs. James put her childhood memories in detail into many handwritten manuscripts over numerous years. Her grandmother, Ada W. Bacot, was a noted confederate nurse during the Civil War. Lillian was an invaluable asset for author, Jean Berlin, in editing her grandmother's diaries for publication of the book, "A Confederate Nurse", published by the University of South Carolina. Lillian went to Winthrop University and served as a senior Marshall at graduation ceremonies in 1939. She then began a teaching career in SC. Due to the military service of her three brothers during World War II, Lillian also felt the need to serve her country and enlisted in the USNR WAVES in 1943. She was trained at Cedar Falls, Iowa In cryptology learning how to decipher Japanese transmission codes and then transferred to Washington, DC and was assigned to U.S. Naval Intelligence. When World War II was declared over (VJ Day) in 1945, Lillian and her best friend, Kathie Hooper Bost, were in New York City and celebrated along with huge crowds in the streets and the entire city. She met the love of her life, Jon Patrick (Pat) James on April 12, 1945, the day President Roosevelt died. In 1949, they and their two children moved to Charlotte, NC. Lillian was the consummate homemaker and Pat was a devoted father and husband. In 1954, Lillian returned to the classroom and taught for 25 years until retirement in 1979 at Cotswold Elementary School. Many of her former students remember her as being an extremely dedicated and creative teacher and all remember her fondly. Lillian was a charter member of the Providence Baptist Church which started in 1950. She had been active in the Faith-Lydia Sunday School Class for many years. She left her home in Charlotte after 56 years for Salisbury, NC and Trinity Oaks Retirement Center in 2012. Mrs. James is survived by two daughters, Barbara Zonoun of Charlotte; Patti J. Glassgow and husband, Bob, of Salisbury, NC; three grandchildren, Shireen Z. Wayne and husband, Steve, of Greensboro, NC, Tiffany G. Wuzzardo and husband, Kevin, of Collierville, Tennessee and Scott Glassgow of Salisbury. Four great grandchildren, Benjamin and Lilly Wuzzardo of Collierville, Tennessee and Brandon and Jaden Wayne of Greensboro, NC. Service: A graveside service will be conducted at 12:00 p.m. Thursday, August 27, 2020 at Sharon Memorial Park in Charlotte. Rev. Dr. Randy Kirby of First Presbyterian Church, Salisbury will officiate. Memorial: In lieu of flowers memorials may be sent to Providence Baptist Church in Charlotte, NC or Faithful Friends Animal Sanctuary (checks may be made to Friends of Rowan-memo: Faithful Friends) PO Box 262, Salisbury, NC 28145-0262. Summersett Funeral Home is serving the James family. Online condolences may be made at www.summersettfuneralhome.com.

Lillian Earle Clarke James, age 103, of Charlotte, NC, passed away on August 20, 2020. She was born at the Roseville Plantation in Florence County, SC, to the late James H. Clarke Sr. and Sula Wade Clarke. She was pre-deceased by her husband,... View Obituary & Service Information

The family of Lillian Earle Clarke James created this Life Tributes page to make it easy to share your memories.

Send flowers to the James family.