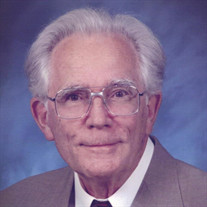 Leonard Casner, age 93, of Salisbury passed away Saturday, July 11, 2020 at the Glenn A. Kiser Hospice House after a three and a half year battle with Alzheimer’s disease. Mr. Casner was born December 25, 1926 at Fort Bragg, North Carolina, the son of the late Maude VanWinkle Casner and Sefton Grant Casner. He was a 1945 graduate of Central High School, Charlotte. While in High School, Mr. Casner worked for the Charlotte News, as a Supervisor and was later promoted to District Manager. A Veteran of the United States Army serving during WWII, Mr. Casner received an Honorable Discharge after serving with the military police in Fort Benning, GA. After completing an Accounting program at Kings Business College in Charlotte, Mr. Casner began working as a Bookkeeper with Fruehauf Trailer Company, Charlotte. In 1952, Mr. Casner continued his career working as the Personnel and Credit manager for “Guyes of Salisbury”, retiring in 1985. Mr. Casner was a charter member of Milford Hills Baptist Church. Mr. Casner’s favorite past times were fishing at Badin Lake, playing horseshoes and beating most every opponent he ever played in checkers. In addition to his parents, preceding him in death are his wife of 44 years, Mildred Mullis Casner, who passed away on February 8, 1996; brothers, Jerome Casner, of Arlington TX, James Grant Casner , of Jacksonville Beach, FL, and sister, Bonnie Jean Hovis of Salisbury. Those left to cherish his memories are his son, David Leonard Casner (Veenita) and daughter, Rhonda Jean Casner of Salisbury; brother, Raymond Casner (Gerry) of Indian Trail; sister, Doris (Cassie) Walker (Scott) of Indianapolis, IN; grandchildren McKay Rickard, Cassie Rickard Marsh (John), Erin Casner Carter (Scott) and Laura Casner Lindley ; great-grandchildren, John Sefton Lindley, Laura Elyse Lindley, Gage McKay Rickard, Maxton McKay Rickard and Cora Leigh Marsh. Mr. Casner leaves behind numerous nieces and nephews who will remember him fondly. A graveside service will be held Tuesday, July 14, 2020 at 11:00 AM at Rowan Memorial Park conducted by Rev. Bruce M. Jones, Organizing Pastor at Imagine Church of the Carolinas. In lieu of flowers, the family request donations be made to the Kiser Hospice House, 1229 Statesville Boulevard, Salisbury, NC 28144. Due to the expected extreme heat, casual / comfortable dress is encouraged. Additionally, due to the Covid 19 pandemic, the family completely understands that some may not be comfortable with attending. The family knows you will be with us in your thoughts and prayers. Summersett Funeral Home is serving the Casner family. Online condolences may be made at www.summersettfuneralhome.com.

Leonard Casner, age 93, of Salisbury passed away Saturday, July 11, 2020 at the Glenn A. Kiser Hospice House after a three and a half year battle with Alzheimer&#8217;s disease. Mr. Casner was born December 25, 1926 at Fort Bragg, North Carolina,... View Obituary & Service Information

The family of Mr. Leonard Casner created this Life Tributes page to make it easy to share your memories.

Send flowers to the Casner family.