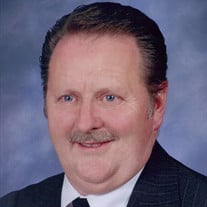 Kerry Joe Ellenburg, 71, of Salisbury, passed away Tuesday, February 12, 2019 at Novant Health Rowan Medical Center. Born April 14, 1947 in Salisbury, he was the son of the late Rebecca Houston Ellenburg and Joseph Ellenburg, Jr. He was educated in the Madison, OH schools and graduated from Madison Memorial High School. Mr. Ellenburg was a veteran of the US Air Force, stationed in Alaska and Denver, CO. Mr. Ellenburg was employed by Air Products as a Distribution Manager for 25 years and later was self-employed. He was a member of Calvary Baptist Tabernacle and the Rick Freeborn Sunday School Class. In addition to his parents, he was preceded in death by a brother, Eddie Ellenburg on October 21, 1996. Those left to cherish his memory are his wife, Barbara Young Ellenburg, whom he married January 22, 1999; daughters, Patricia Ellenburg of Salisbury and Faith Wright (Thomas) of Denver, CO; step-daughter, Melody Malone (Rich) of Charlotte; step-sons, Christopher Malone (Crystal) of Yanceyville and Scott Malone (Sabrina) of Charlotte; brothers, Matthew Ellenburg and Robert Ellenburg both of Salisbury; sisters, Donna Birch of Columbia, SC, Linda Easterday of Arizona City, AZ, Dottie Latva of Salisbury, Jeanie Globig of Mechanicsburg, VA and Patricia Crotts of Florida; grandchildren, Dustin, and Dakota Wright, Gage, Gavin and Cullen Malone, Nash and Vance Pelak; and one great-grandchild. The family will receive friends from 1-3 PM Friday (Feb. 15) at Calvary Baptist Tabernacle and at other times the family will be at the residence. Funeral service will be held at 3 PM – Friday at Calvary Baptist Tabernacle with Rev. Steve Holshouser and Rev. Brian Vanderford officiating. Interment services will be held at 9 AM – Monday (Feb. 18) at the Salisbury VA National Cemetery with Military Graveside Rites conducted by the US Air Force and the Rowan County Veterans Honor Guard. Memorials may be made to Calvary Baptist Tabernacle, 3760 Stokes Ferry Rd., Salisbury, NC 28146 Summersett Funeral Home is serving the Ellenburg family. Online condolences may be made at www.summersettfuneralhome.com.

Kerry Joe Ellenburg, 71, of Salisbury, passed away Tuesday, February 12, 2019 at Novant Health Rowan Medical Center. Born April 14, 1947 in Salisbury, he was the son of the late Rebecca Houston Ellenburg and Joseph Ellenburg, Jr. He was educated... View Obituary & Service Information

The family of Kerry Joe Ellenburg created this Life Tributes page to make it easy to share your memories.

Send flowers to the Ellenburg family.