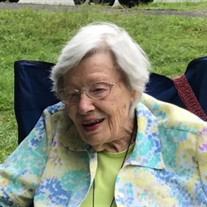 Kathryn Inez Smith Graham, 95, of Cleveland, NC passed away Wednesday, September 16, 2020 at Liberty Commons Nursing & Rehab Center, Salisbury. Born September 18, 1924 in Morganton, NC she was the daughter of the late Felix G. and Anniebelle Walker Smith. She was educated in the public schools in Morganton and attended Appalachian State Teachers College (now Appalachian State University). Mrs. Graham was a homemaker and kept the books for the family farm, Third Creek Dairy Farm. She was an avid gardener and was committed to rescuing Cleveland’s homeless cats. Mrs. Graham was a member of Third Creek Presbyterian Church, where she held the title of being the oldest member until her death. She was a past member of the John Knox DAR. In addition to her parents, she was preceded in death by her husband, Charles T. Graham on November 12, 1993, her son, Charles T. Graham, Jr. on March 4, 2013 and her sister, Billie G. Wright from Smithfield, NC. Left to cherish her memory is her daughter, Kathy Graham Pulliam (David) of Salisbury, NC and three grandchildren, Jessica Graham Green (Ben) of Sylva, NC; Whitney Graham Lowe (Nick) of Mooresville, NC and Scott J. Graham (Jessica) of Statesville, NC. There are 6 great-grandchildren: Charleigh Kate and Owen Green, Graham Lowe and Addie, Paisley and Scheyer Graham and a number of nieces and nephews also left to remember her. The family would like to thank the staff of Liberty Commons for taking such good care of Kathryn or “Little Bit” as she was known to them. A Graveside Service will be held at Cleveland Town Cemetery on Monday (Sept 21) at 2 PM with Dr. Randal Kirby of First Presbyterian Church of Salisbury officiating. Due to COVID-19 please be respectful of social distancing and wear a mask. In lieu of flowers memorials may be made to Faithful Friends by Friends of Rowan, PO Box 262, Salisbury, NC 28145-0262; please write on the memo line Faithful Friends and donations will be doubled or to the Humane Society of Rowan County, PO Box 295, Salisbury, NC 28145. Summersett Funeral Home is serving the Graham family. Online condolences may be made at www.summersettfuneralhome.com.

The family of Kathryn Inez Smith Graham created this Life Tributes page to make it easy to share your memories.

Send flowers to the Graham family.