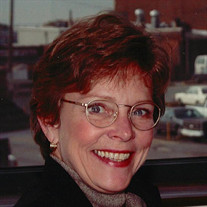 Judith "Judy" Gooch Newman passed away January 20, 2022, in her hometown of Salisbury, NC. Although her death was untimely, she passed peacefully surrounded by her family. Judy was born in Salisbury, NC on February 24th, 1947, a part of the Baby Boomer generation after WWll. She grew up in Salisbury, NC, High Point, NC and Tyler, TX. She graduated from Robert E. Lee High School in 1965 in Tyler. It was also in Texas where she began her undergraduate studies at Texas Tech University. She completed her degree in Business Administration at Catawba College in May of 1981. She was also a long-standing member of St. Luke's Episcopal Church. Judy was the first Executive Director of the Rowan County Tourism Authority where she worked most of her career. Her leadership was instrumental in bringing the Trolley Program to Salisbury and building it to the success we see now. She also partnered with the County through legislation to create the Tourism Development Authority as the independent public authority it is today. Her service in this role was recognized when she received the "Distinguished Alumnus Award" from Catawba College in 2001. In retirement, Judy served in a number of volunteer organizations including St Luke's Episcopal Church's Altar Guild, Food for Thought, and Rowan Helping Ministries. Anyone who worked with her knew she threw herself wholeheartedly into her work. One joked, "There is the right way and then there's Judy's way." Her energy and spirit drove to get things done and help those around her. She also had a deep love and appreciation for her family especially her daughter, Travis Brady, and her granddaughter, Grier Grose. When Judy was not volunteering, she spent time sharing recipes and craft ideas for their next projects together. Judy is survived by her husband, Harold "Hank" Newman lll, daughter, Travis Elizabeth Brady, her husband, David Spencer Grose, and their daughter, Julia Grier Grose. She is also survived by her sister, Eleanor Gooch Hall, husband, Charles Franklin Hall and their children and grandchildren, Carter Hall Fogleman, Louis Henry Fogleman III, Eliza Jennings Fogleman, Andrew Charles Fogleman, Molly Fields Hall, Charles Austin Hall, Mary Christina Hall, and Eleanor Moore Hall and her godson, Porter O'Neill Glock. She was preceded in death by her mother, Julia Carter Gooch, and father, Lonnie Charles Gooch, and her beloved Jack Russell Terriers, Miss T and Spec. Her family wishes to share their deepest gratitude for the staff in the CCU Unit at Novant Health in Salisbury for their excellent, compassionate care. A memorial service will be planned in the near future. In lieu of flowers, memorial gifts can be made to St. Luke's Episcopal Church, 131 West Council Street, Salisbury, NC 28144 or give online at www.SLS.church/give, then choose “Memorial” from the drop-down list.

Judith "Judy" Gooch Newman passed away January 20, 2022, in her hometown of Salisbury, NC. Although her death was untimely, she passed peacefully surrounded by her family. Judy was born in Salisbury, NC on February 24th, 1947, a part of the... View Obituary & Service Information

The family of Judith "Judy" Gooch Newman created this Life Tributes page to make it easy to share your memories.

Send flowers to the Newman family.