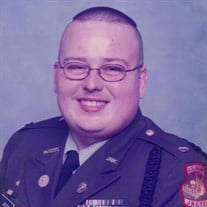 Joshua Nathaniel Jacobs born October 2, 1981, passed away unexpectedly at the age of 38, on July 4, 2020 at his residence truly gaining his independence from a brain injury while on call for the Rockwell Rural Fire Department on September 26, 2012. Joshua was a true warrior fighting his way back from a coma and many months in Baptist Hospital. Then to Neurology Rehab for one and a half years relearning everything all over again to be able to come back home again and live independently. He was also able to start driving again. However, he was not able to return back to gainful employment with P&G Security where he had worked before as a security guard or back to firefighting at Rockwell Rural Fire Department due to his injury. He did cherish his Veteran Firefighter of the year Award 2012 where he had served eight years prior to his injury. He was also a member of the Honor Guard. Joshua still wanted to give back to his community so he volunteered at Rowan Helping Ministry three days a week. Joshua was a longtime active member of Friendship Baptist Church where he had participated in World Changers and assisted in Vacation Bible School and the Adopt A Highway Program just to list a few. He enjoyed fishing, taking care of his truck and time with family and friends. Joshua went to North Hills Christian School before attending grades 10-12 at East Rowan High School where he graduated in 2001 and experienced many accomplishments in the ROTC Program. He was preceded in death by his grandparents, Charles Douglas Jacobs and Lora Jeannette Jacobs. Those left to cherish Joshua’s memories are his father, William T. Jacobs and his wife, Brenda Butler and his mother, Janet V. Jacobs; grandparents, George and Shirley Vines, aunts and uncles: David S. Jacobs, Janet Geohner Jacobs, and niece, Heidi Jacobs, Douglas & Gail Jacobs, Paul Jacobs, Todd & Linda Lail, Greg & Betty Craig, Peggy Vines. Also surviving him are his wonderful friends, Matthew McNally and Charles Sheeks whose friendship remained invaluable and Hal and Karen Sutton who always included him in all their events. A memorial service will be held Friday (July 17) at 10:30 AM at Summersett Funeral Home. In lieu of flowers please make a donation to the Brain Association of North Carolina, 3733 National Drive, Suite 115, Raleigh, NC 27612; Rowan Helping Ministry, PO Box 4026, Salisbury, NC 28145 and Friendship Baptist Church, 100 Porter Rd, Salisbury, NC 28146. Summersett Funeral Home is serving the Jacobs family. Online condolences may be made at www.summersettfuneralhome.com.

Joshua Nathaniel Jacobs born October 2, 1981, passed away unexpectedly at the age of 38, on July 4, 2020 at his residence truly gaining his independence from a brain injury while on call for the Rockwell Rural Fire Department on September 26,... View Obituary & Service Information

The family of Joshua Nathaniel Jacobs created this Life Tributes page to make it easy to share your memories.

Send flowers to the Jacobs family.