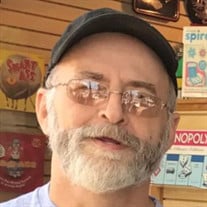 Joseph Patrick “Joe” Brincefield, 66 of Salisbury passed away Friday, October 9, 2020 at his residence from Liver Cancer. Born March 14, 1954 in Salisbury, he was the son of the late Vivian Rouche Brincefield and William Brincefield. He was educated in the Salisbury schools and graduated from Salisbury High School. He operated Brincefield Plumbing for 10 years and later was employed by Freightliner before retiring. He was a member of Sacred Heart Catholic Church. Joe was a devoted husband, father, PawPaw, brother, and friend. Joe had a love for music and spent every Friday night jammin’ with his brothers and good friends. He was an extremely talented guitarist, song writer, and artist. He had a love for the mountains and solitude. Joe enjoyed spending time with his family and six brothers, and being a PawPaw. He was a meticulous cook, and he always had a remodeling project going around the house. He was known for his sense of humor and willingness to help anyone who needed a hand., Those left to cherish his memory are his wife, Yvonne Smith Brincefield; children, Jennifer Brincefield Sapp (Jason), and Jordan Patrick Brincefield; brothers, Mark Brincefield (Susan), Jim Brincefield (Kaloni), Ed Brincefield, Mike Brincefield (Shelly), John Brincefield (Cris), Bill Brincefield (Lydia); grandchild, Kaden Patrick Rogers. A Memorial Service will be held 1:00 PM Wednesday (Oct. 14) at Summersett Funeral Home with Rev. Nathan Hammill, Pastor of Open Door Baptist Church, officiating.

Joseph Patrick &#8220;Joe&#8221; Brincefield, 66 of Salisbury passed away Friday, October 9, 2020 at his residence from Liver Cancer. Born March 14, 1954 in Salisbury, he was the son of the late Vivian Rouche Brincefield and William Brincefield. He... View Obituary & Service Information

The family of Joseph Patrick "Joe" Brincefield created this Life Tributes page to make it easy to share your memories.

Send flowers to the Brincefield family.