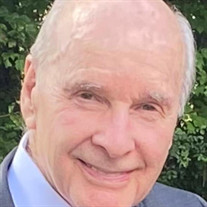 Mr. John Charles Dickson, 84, of Salisbury, NC passed away Friday, December 3, 2021, at Novant Health Rowan Medical Center. Born March 22, 1937, in Milwaukee, WI, he was the son of the late Arthur Emerson Dickson and Florence Elizabeth Herrick. A graduate of West Division High School in Milwaukee, Mr. Dickson served in the United States Army 77th Special Forces Group Airborne as a Green Beret at Fort Bragg. He worked for a newspaper, as a radio announcer, and later as an insurance salesman and trainer for Combined Insurance Company in West Columbia, SC and in Marietta, GA, where he spent most of his life. He was the owner of Professional Services Group Carpet and Upholstery Cleaning, and he self-published two novels. Mr. Dickson also greatly enjoyed driving for Uber and Lyft, until age 84. He had recently moved to Salisbury to be near his daughter and her family and was a new resident of Oak Park Retirement Community. He was of Presbyterian faith. Mr. Dickson is preceded in death by his wife, Helen Major Dickson; sisters, Jeanne Dickson, Joanne Burke (Bill); and stepson, Anthony Godfrey (Retha). Those left to cherish his memory are his daughter, Carolyn Mowery (Ken); brother, James E. Dickson (Judy); grandchildren, Luke Mowery (Cara), Daniel Mowery (Alyssa), Joseph Mowery (fiancée, Miranda Smith); and many loving nieces and nephews. A graveside service will be conducted at 10 a.m. Wednesday (December 29th) at the Salisbury National Cemetery. Military Rites will be provided by the National Guard Honor Guard and the Rowan County Honor Guard. In lieu of flowers, donations may be made to Wounded Warrior Project. P.O. Box 758516, Topeka, Kansas 66675. Summersett Funeral Home is serving the Dickson family. Online condolences may be made at www.summersettfuneralhome.com.

The family of John Charles Dickson created this Life Tributes page to make it easy to share your memories.

Send flowers to the Dickson family.