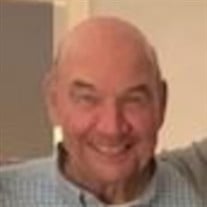 Jesse Robert Anderson, devoted husband, father, and “Da” went to be with the love of his life, Brenda Carol “Nana” and his Lord on Friday March 19th, 2021. He left this life unexpectedly, leaving behind a wealth of loved ones and so many friends. Twelve years ago, he spent many months in an ICU for an aortic aneurysm. While he was a patient, he was given the title “Miracle Man,” as he was not expected to make it. He recovered and blessed all who knew him with his continued wisdom, presence, and love. Robert was born on July 22nd, 1940 in Rowan County. He worked as an auxiliary police officer for Spencer and as firefighter for the Town of Granite. Some of his career was spent at Spencer Textiles and as a welder for Taylor Manufacturing and Hay Automation. Robert furthered his career with Celanese before retirement. Not one to sit still for long, he went back to work for the Town of Granite in many capacities. He eventually retired officially to spend more time with his family. Da is survived by son Kenneth and fiancé Amanda Vaughn; daughter Amy and husband Doug Shellhorn and their children, Walker, Blaine, and Faye Carol; his beloved sister-in-law Bobbie Earnhardt; and nephews Darren Earnhardt, Shane Earnhardt, and their families. He was preceded in death by his parents, Gilmer and Geneva Anderson and his wife, Brenda. Robert “Da” was known in the community for being the “adopted Da” for many children and adults who loved and adored him. He cherished his many family and friends at all times, but especially during annual beach and Halloween camping trips. Da also loved working in the shop with his grandchildren. One of his favorite things was attending his grandchildren’s sporting events and cheering for them. He will be greatly missed by his family, friends, and everyone who knew him. Robert’s graveside service will be at Rowan Memorial Park on Sunday March 21st, 2021 at 2:00 p.m. His family will receive friends following the burial at the gravesite. Summersett Funeral Home is serving the Anderson family. Online condolences may be made at www.summersettfuneralhome.com.

The family of Jesse Robert Anderson created this Life Tributes page to make it easy to share your memories.

Send flowers to the Anderson family.