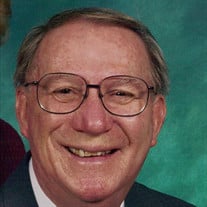 Jerry L. Safrit, 89, of Salisbury, NC died Saturday, March 26, 2022 at his home after several months of declining health. Born June 6, 1932 in Salisbury, NC to the late Otis H. and Katheryne Cauble Safrit, he was educated in the Rowan County schools and a graduate of Boyden High School Class of 1951. Mr. Safrit served in the U.S. Navy from 1951 to July 1955. He served on the USS Stickel during the Korean War. Mr. Safrit worked in the Personnel Office specializing as a Court Reporter. He traveled across the United States nine times an around the world once while he was in the Navy. After his military service he worked at Casper’s Shoes and Phil’s Shoe for 46 years before retiring in 1994. While at Phil’s he managed and supervised stores in North and South Carolina. He was a member of First Baptist Church of Spencer. There he was in the choir and taught Sunday school for 44 years. He was a Deacon and former Chairman and served on the Nominating Committee as Chairman for 12 years. Preceding him in death was his wife of 57 years, Peggy Kluttz Safrit on March 9, 2014; brother Bob Safrit and sister, Sara Safrit Keith. Surviving are his son, Jeff Safrit and wife Candice of China Grove, NC; daughter, Kathy Campbell and husband Mike of Kannapolis, NC; brother, Bill Safrit and wife Linda; and sister, Bevis Norris all of Salisbury, NC; granddaughter, Sarah Safrit of China Grove, NC and numerous nieces and nephews. The family will receive friends from 2:30-3:30 PM Wednesday (March 30) at Mt. Zion United Church of Christ. The memorial service will follow at 4 PM at the church, officiated by Rev. Franklin Myers. Entombment will follow at a later date at the U.S. National Cemetery. Memorials may be made to Hospice of Davidson County, 200 Hospice Way, Lexington, NC 27292 or Mt. Zion United Church of Christ, 1415 S. Main Street, China Grove, NC 28023. Summersett Funeral Home is serving the family. Online condolences may be made at www.summersettfuneralhome.com.

Jerry L. Safrit, 89, of Salisbury, NC died Saturday, March 26, 2022 at his home after several months of declining health. Born June 6, 1932 in Salisbury, NC to the late Otis H. and Katheryne Cauble Safrit, he was educated in the Rowan County... View Obituary & Service Information

The family of Jerry L. Safrit created this Life Tributes page to make it easy to share your memories.

Send flowers to the Safrit family.