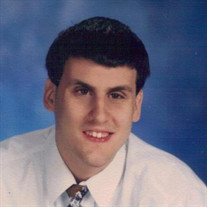 Jason Mark Arthur passed away peacefully in hospice care on October 6, 2021, following a period of rapidly declining health. Jason was born November 2, 1974, in Salisbury, NC. He was educated in the Rowan-Salisbury School system and received his certificate from Salisbury High School in 1996. Jason experienced several challenges in life due to being born with autism spectrum disorder, ataxia cerebral palsy and an intellectual disability. Despite these obstacles, he was proud to work at the Vocational Workshop in Cleveland for many years. Although he had to rely on support staff at his group home residence, he had a level of independence for most of his life that many individuals with cerebral palsy never attain. Jason enjoyed participating in Special Olympics over the years. He particularly enjoyed attending dances and other activities sponsored by the ARC of Rowan. Due to his cognitive limitations, Jason retained a child-like joy and trust in others throughout his life. What you saw with Jason was what you got! Although he was middle aged, his excitement for the holidays was quite contagious. Another gift he displayed was an unconditional acceptance of others. He simply was not capable of passing judgment based on race, SES, political or religious beliefs. Jason assessed people by the kindness of their actions. He enjoyed the simple things in life such as celebrating birthdays with family, listening to music, food from his favorite restaurants (including Diet Cokes), game shows, car rides across town and trips to the beach. Without a doubt, his favorite vacation was a visit to the set of Price is Right in California where he was able to meet his favorite TV personality, Bob Barker. Jason wanted to connect with people, but he frequently had a challenging time expressing his thoughts in words. That said, he was a great advocate for himself. He would take your hand or pat your arm repeatedly to make sure he was being heard. He also had several rituals and routines that gave him great comfort such as never leaving the house without his ball cap, wallet, and sunglasses. Jason had a true knack for being persistent in order to reach his goals. (There was not a chance that he would forget about that extra piece of birthday cake or a serving of Sue’s Grahams.) Those left to cherish his memory include his parents Brenda Arthur (Salisbury) and Mark Arthur (Carolina Beach), his sister April Lamanno (David) of Spencer, NC, stepfather, Parker Cristman (Salisbury, NC), stepsister, Michelle Creamer (John) of Carolina Beach, NC, niece Eva, nephew Harrison, as well as aunts, uncles, and cousins. He was proceeded in death by maternal and paternal grandparents (Clara Gardner, Winston Salem and Harry and Catharine Arthur, Salisbury, NC) as well as stepmother, Martha Arthur. In lieu of flowers, the family requests that you consider a donation to the Glenn Kiser Hospice House in memory of Jason. The family wishes to extend their sincere thanks for the support and kindness shown by staff at the Glenn A Kiser Hospice House and Forsyth Hospital. A memorial service will be held 2:00 PM Saturday - November 6th at Summersett Funeral Home. Everyone attending is asked to please wear a mask. Summersett Funeral Home is serving the Arthur family. Online condolences may be made at www.summersettfuneralhome.com.

Jason Mark Arthur passed away peacefully in hospice care on October 6, 2021, following a period of rapidly declining health. Jason was born November 2, 1974, in Salisbury, NC. He was educated in the Rowan-Salisbury School system and received... View Obituary & Service Information

The family of Jason Mark Arthur created this Life Tributes page to make it easy to share your memories.

Send flowers to the Arthur family.