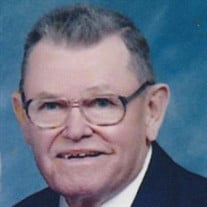 James Pinkney Trexler (1921–2020), the beloved legionnaire known for his “Pinky” dogs, died at the age of 99 on Saturday, September 26, 2020 at home with family. Born on March 6, 1921 to Mr. James Pinkney Trexler, Sr. and Mrs. Maggie Chunn Trexler, Pinkey served the people of Rowan County his entire life. In 1940, nineteen-year-old Trexler joined the National Guard; he transferred into the Army when the United States entered WWII. Prior to leaving for the war, he married Mable Hutchinson, soon leaving his new bride to work with the Army Corps of Engineers as a member of the 10th Mountain Division. In 1945, the Division deployed to the Italian Theater of WWII, and Pinkey entered northern Italy where he helped to build a tram up Mount Belvedere to transport arms and soldiers. While in Italy, Staff Sargent Trexler led his platoon in clearing minefields. Under intense pressures, he committed to staying in the fields alongside the members of his platoon even under German fire. His actions earned him a Bronze Star from the United States Army. After spending over six months in Italy, Pinkey returned to the United States, leaving the army with honorable discharge on August 29, 1945. Back in Rowan County, Trexler joined his wife, Mable Hutchinson, and his firstborn son, James Edward. He soon started working with Southern Bell telephone company, using his engineering skills to string phone lines and improve communication in the county. He continued to do so for the next thirty-eight years. In addition to building his family, he took an active role in the American Legion, particularly serving in various officer positions with the Veterans of Foreign Wars, to support the veterans in Rowan County and around the country. Many will remember him in the kitchen, cooking barbeque for fundraisers, chopping cabbage for slaw, and serving meals to the community. In 1957, Pinkey started volunteering with the NC American Legion baseball team, taking his cooking skills to the ballpark where he served up ‘Pinky’ dogs to baseball fans. In 1958, the Legion turned the concession stand over to Pinkey. ‘Pinkey’s Joint’ became a mainstay of Legion baseball games until he retired in 2002. In 1988, the NC American Legion Baseball Hall of Fame inducted Pinkey for his devotion and service. He loved hearing people shout out greetings and asking for a hotdog. Trexler also worked with his community as a deacon at Calvary Baptist Church. For over fifty years, children in the church have called Pinkey the ‘candy man,’ as he always carried peppermints and candy bars in his pockets. He delighted in sharing candy with everyone. He said it offered him a chance to put more sweetness in the world. During Christmas, he donned a Santa suit to visit everyone in the Rowan Memorial Hospital on Christmas Eve, as well as bless children and adults in church and Legion functions alike throughout the Christmas season. Pinkey leaves behind a beautiful legacy. He is preceded in death by his wife, Mable Hutchinson; son, James Edward; one grand-daughter, Reesa; one brother; and four sisters. He is survived by his daughter, Deana Trexler of Spencer, NC; his sons, Gary ‘Pinkey’ Trexler of Salisbury, NC and Rick Trexler (Joy) of Salem, VA; his brother, L.C. (Nancy); six grandchildren; seven great-grandchildren; and ten great-great grandchildren. He will be deeply missed and yet his family takes solace in knowing he is home. The family will receive friends on Wednesday morning, September 30 from 10-11 AM at the Summersett Funeral Home. Services: Due to Covid19 conditions a memorial service for family and friends will be held outdoors at Summersett Funeral Home. The service will begin at 11 AM on Wednesday, September 30 with military honors by the Rowan County Veterans Honor Guard and the National Guard. The family requests anyone attending maintain social distancing and wear masks. Burial will be at a later date at the National Cemetery in Salisbury. Memorials: Memorials may be made to Calvary Baptist Church, 2255 E. Ridge Road, Salisbury, NC 28144 or Trellis Supportive Care, 301 S. Main Street, Salisbury, NC 28144. Summersett Funeral Home is serving the Trexler family. Online condolences may be made at www.summersettfuneralhome.com.

The family of James Pinkney Trexler created this Life Tributes page to make it easy to share your memories.

Send flowers to the Trexler family.