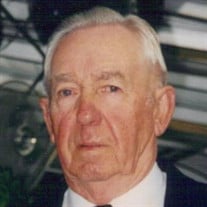 James Albert Clary, 95, of Salisbury, passed peacefully away Friday, March 27, 2020 at the W. G. Hefner VA Medical Center, Hospice Unit. Mr. Clary was born August 19, 1924 in Lawrenceville, VA and was the son of Albert E Clary and Burrie Ashburn Doyle Clary. Mr. Clary was a veteran of the US Army Medical Corp. during World War II, and was stationed in France at the 250th General Hospital. He also served at the Pentagon in Washington, DC as a medical technician, upon returning to the states. He was in the retail furniture business in Salisbury for 51 years before retiring. He co-owned Reavis-Clary furniture store and also worked part time in several others. After retiring, he enjoyed fishing and was in the Salisbury BassMasters Fishing Club for many years, until his eyesight failed. In addition to his parents, he was preceded in death by his wife of 62 years, Miriam Barringer Clary in 2010, a sister, Betty Clary Mitchell, and a brother, Eugene Owen “Buddy” Clary. Those left to cherish his memory are his son, James Brown Clary of Salisbury, a sister-in-law, Marie Barringer Cuthrell of Salisbury, a niece, Libby Kimball Holman and five nephews, Tommy Kimball, Kim Barringer , Alan Barringer , Bob Clary and Gene Clary. Mr. Clary was a member of First United Church of Christ and used his woodworking skills to help with the construction of the present sanctuary. He was always interested in the activities taking place there, even though he was unable to attend. There will be a private burial in Chestnut Hill Cemetery with the Rev. Carol Hallman, minister of the First United Church of Christ officiating. A memorial service will be planned in the future. The family would like to thank those friends who provided meals and support during the past year. A special thanks to our dedicated and caring nurse from Bayada Home Health. In lieu of flowers, memorial gifts may be made to First United Church of Christ, 207 West Horah Street, Salisbury, NC 28144.

The family of Mr. James Albert Clary created this Life Tributes page to make it easy to share your memories.

Send flowers to the Clary family.