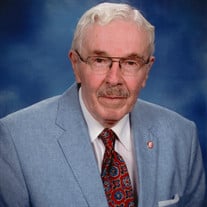 James (Jim) Alden Baird, 93, of Salisbury, NC passed away peacefully and was born into eternal life on January 7, 2022 at the Lutheran Home at Trinity Oaks. He was born June 3, 1928 in Weymouth, MA to Mazie Lewis Baird and Robert Baird. He was a 1946 graduate of Whitman High School, and served two years in the U.S. Navy as a 3rd Class Radar Man. He went on to earn his Bachelor of Science in Textile Chemistry in 1952 from New Bedford Textile Institute (now University of Massachusetts Dartmouth). On June 26, 1954 he married his sweetheart June Nieter and they enjoyed 55 ½ wonderful years of marriage. Mr. Baird was employed as a Textile Chemist by Sandoz Textile Division for 26 ½ years and Jockey International for 14 ½ years. He was a 32nd Degree Mason, and member of the Madisonville-Madiera-Mariemont Masonic Lodge No. 419 F.& A.M. and the Valley of Cincinnati Ancient Accepted Scottish Rite. Since childhood, Jim enjoyed being near the water, particularly sailing; first in a homemade sailboat and later, with his family on Lake Michigan in his Rhodes 19 sailboat named “It’s About Time”. He was fearless at the helm and enjoyed many sailing adventures with his family. He was a member of the United States Power Squadron in Cincinnati, OH, Dupage County, IL, and Kenosha, WI. He was a member of Milford Hills United Methodist Church and the Golden Rule Sunday School class. He loved the Lord and lived a very faithful life, serving on multiple church committees and participating in many Bible classes, United Methodist Men, prayer breakfast, Friendly Neighborhood and Cheergivers. He was a member of the JF Hurley YMCA and Rufty Holmes Senior Center, where he enjoyed water exercise, computer club, creative writing classes, Men’s Breakfast Club, and his favorite – the Woodcarver’s Group. He loved gardening and often said he felt close to God in his garden. He was a talented wood carver and won many medals in Silver Arts over the years. He loved participating in up to 13 events in the Senior Games for over 25 years. In 2016, following a 5 month hospitalization and rehab after open heart surgery, he quickly began to train at home and participated in the Senior Games just 2 months after returning home! A consummate gentleman and life-long learner, Jim’s thirst for knowledge was unquenchable, his love of God, country and family was steadfast, his determination was unwavering, and his positive attitude and captivating smile warmed the hearts of everyone he met. His confidence in what awaited him in Heaven never faltered. Preceding him in death were his parents, his wife Margaret June Baird on December 29, 2009, and his brother Stanley L. Baird. He is survived by his daughter Carolyn J. Serpe and husband George of Kenosha, WI; his son William J. Baird of Joelton, TN; grandchildren Maureen Bakk and husband Christopher, Alden, Ryan, and Lilly Baird, and his dear friend and companion Betsy Rich of Salisbury, NC. Visitation will be held Friday, January 14, 2022 from 10:00-11:00am in the Fellowship Hall at Milford Hills United Methodist Church. A memorial service will be held at 11:00am at Milford Hills United Methodist Church, conducted by the Reverend Jim Parsons. Summersett Funeral Home is serving the Baird family. Online condolences may be made at www.summersettfuneralhome.com In lieu of flowers, memorials may be made to Milford Hills United Methodist Church, 1630 Statesville Blvd, Salisbury, NC 28144. The family would like to express their gratitude to all the amazing members of Milford Hills UMC, and to the wonderful residents and staff at Trinity Oaks/Trinity at Home.

James (Jim) Alden Baird, 93, of Salisbury, NC passed away peacefully and was born into eternal life on January 7, 2022 at the Lutheran Home at Trinity Oaks. He was born June 3, 1928 in Weymouth, MA to Mazie Lewis Baird and Robert Baird. He was... View Obituary & Service Information

The family of James Alden Baird created this Life Tributes page to make it easy to share your memories.

Send flowers to the Baird family.