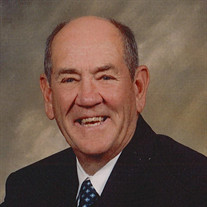 Howard Wesley Everhart, 87, entered the Church Triumphant on May 6, 2020. He was at the beach with his beloved wife and good friends. After having set the table for breakfast, he left us quietly and without fanfare, the way he would have chosen. The son of the late George Raymond and Bessie Sink Everhart, Howard lived his entire life in Spencer. He was the youngest of six siblings, all of whom preceded him in death. His brothers were G.R., Eugene, Donald, and Joe, all of whom lived in Spencer, and his sister, Geneva Everhart Creech, who lived in Greensboro. He was also preceded in death by his son-in-law, Eric Lentz. Howard graduated from Spencer High School in 1951 and took classes at Rowan Technical Institute. He worked for Southern Railway for a year before joining the U.S. Navy, serving in Saipan during the Korean War. He retired from the U.S. Postal Service after 34 years of service, walking 17 miles a day for his entire career. He worked with his brothers at Everhart Electric for many years. He was proud of his service with the Spencer Fire Department, where he retired as chief. Howard was a member of St. John’s Lutheran Church, Salisbury, where he and his wife were faithful members of the Martin Luther Sunday School class. He was a former member of Central United Methodist Church, Spencer. He volunteered for many years with Meals on Wheels and Habitat for Humanity. Skilled at any type of construction work, he went on church mission trips. At St. John’s, he enjoyed going on the men’s beach retreat each spring. Howard loved the town of Spencer, where his grandson-in-law Jonathan Williams serves as mayor; the N.C. Transportation Museum; and he was a huge supporter of North Rowan High School, where his granddaughter, Meredith Williams, serves as principal. Howard and his wife have lived across the street from the school since 1965, in a tidy brick house with an immaculate yard. A couple of years ago, during a school event at Christmastime, Howard was the lone figure in the school’s front yard, likely unnoticed by many, patiently raking leaves onto a giant tarp. No one had asked him to do it, and he went about his work quietly and without fanfare. “We’re all just one big family at North Rowan,” he said at the time. Howard and his wife, Diane, were married on Nov. 22, 1956. They had three children, Kimberly Lentz and T. Kelly Everhart (Carol) of Spencer, and Kenneth Everhart (Marilyn) of Raleigh. Their grandchildren are Meredith Williams (Jonathan), Nicholas Lentz (Mariah), Abby Everhart, Kyle Everhart, Hunter Everhart, Spencer Everhart, and Anna Everhart. Their great-grandchildren are Ashton Williams, Jackson Williams, and Charlotte Williams. Howard is also survived by numerous nieces and nephews and a sister-in-law, Barbara C. Everhart, of Spencer. Howard was an avid hunter and instilled a love of hunting in his sons, grandchildren and great-grandsons. He was delighted to be in the field with four generations of his family on the first day of dove hunting season, a family tradition. They also went deer hunting together. One year, on Thanksgiving Day, the hunting party stayed out too late, way past the time the meal had been served. That was the last time Diane cooked Thanksgiving dinner. “I don’t remember that,” Howard said, when the story was recounted years later. Howard was smart in more ways than one. Because of current public health concerns, the family will gather for a private service, with a memorial service at a later date. Memorials may be sent to St. John’s Lutheran Church, G2G Campaign, 200 W. Innes St., Salisbury, NC 28144. If you knew Howard, he’d always greet you with a hearty “Hey Shug!” and either a handshake, hug, or kiss, or a combination of the three. Years later, you might learn that “Shug” was short for “Sugar,” and the reason he called people that was so he wouldn’t have to keep up with names. You may not remember the last time you saw Howard, but you can be sure his last words to you were, “Love you, Shug.” Because that’s how he always ended every conversation. As we begin to live our lives without Howard, let’s remember the fine person he was, and endeavor to emulate his words and deeds. As Howard would say, “Don’t you worry about me, Shug, I’m fine!” Summersett Funeral Home is serving the Everhart family. Online condolences may be made at www.summersettfuneralhome.com.

Howard Wesley Everhart, 87, entered the Church Triumphant on May 6, 2020. He was at the beach with his beloved wife and good friends. After having set the table for breakfast, he left us quietly and without fanfare, the way he would have chosen.... View Obituary & Service Information

The family of Howard Wesley Everhart created this Life Tributes page to make it easy to share your memories.