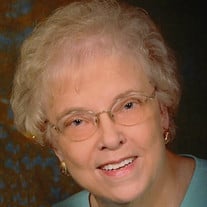 Hilda Marie Lundy Moose went to reside in her heavenly home on April 9, 2021. She died peacefully at Glenn A. Kiser Hospice House following an extended illness. Mrs. Moose is predeceased by H.C. Lundy, father, Margaret Lloyd Lundy, mother, Harold and Denny Lundy, brothers, and Gladys S. Lundy, sister-in-law. Mrs. Moose is survived by her husband, Carl Russell Moose, Sr., of 65 years. They were married at Hebron Baptist Church in Statesville, NC on August 4, 1956. Mrs. Moose is lovingly remembered by her daughter, Carla Moose Erwin of Salisbury, her son, Carl “Rusty” Moose of Granite Quarry, her granddaughter, Jessica Erwin of Charlotte, her brother, Donald Lundy of Statesville, her sister and brother-in-law, Pat and Fred Hardee of Winston-Salem and numerous nieces and nephews. Mrs. Moose was born in Iredell County, NC in 1936. She graduated from Harmony High School in 1954. One of her first jobs included being a bus driver during her senior year of high school. She worked as a secretary at the Clerk of Court’s office in Iredell County and was an accomplished stenographer. She worked as a secretary for RSSS at the Supplementary Center (now known as Horizons) and then was employed as a secretary in Rowan County’s Clerk of Court’s office for over 25 years; one of her positions included Assistant to the Clerk of Court. Hilda enjoyed spending time on the beach in Hilton Head Island, SC, driving the Blue Ridge Parkway and having a picnic lunch, or having a cookout with friends and family. She was a devoted wife, mother, and grandmother. You could often find her listening to the music of Elvis Presley, Michael Bolton, or Neil Diamond. Whether it was a choral performance or cheer competition, you could always find her in the audience beaming with pride, cheering her family on. Sundays were reserved for church, spending time with family, and watching NASCAR or golf. She was an amazing cook and was famous for her red velvet Christmas tree cakes and chocolate fudge. She was a member of the United Methodist Women at The Arbor United Methodist Church.. The funeral service will be held graveside at The Arbor United Methodist Church Cemetery on Woodleaf Road in Salisbury, NC at 2:00 p.m. Wednesday (April 14) with Rev. Jacqueline Tookey officiating. In lieu of flowers, memorial donations may be made to the Children’s Home Society of NC (www.chsnc.org). Summersett Funeral Home is serving the Moose family. Online condolences may be made at www.summersettfuneralhome.com.

The family of Hilda Marie Lundy Moose created this Life Tributes page to make it easy to share your memories.

Hilda Marie Lundy Moose went to reside in her heavenly home on...

Send flowers to the Moose family.