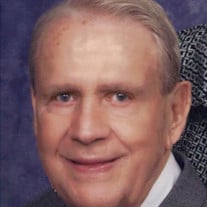 Harry Glenn “Boonie” Young, Jr., 85 of Salisbury, passed away Sunday, May 3, 2020 at Autumn Care of Salisbury. Born September 24, 1934 in the Yadkin Community of Rowan County, he was the son of the late Florence Holshouser Young and Harry Glenn Young, Sr. He was educated in the Spencer and Salisbury schools and graduated from Boyden High School, Class of 1952. Mr. Young received a scholarship to play football at Catawba College and graduated in 1956. He enjoyed golf, running and was a member of the YMCA. Mr. Young was a Furniture Sales Representative for American of Martinsville for 35 years before retiring. He was a member of the First Presbyterian Church of Salisbury where he served as an Usher, was a former Deacon and Sunday School teacher. In addition to his parents, he was preceded in death by his brother, Jim Young and a sister, Hilda Young Carter. Those left to cherish his memory are his wife of 63 years, Sandra Shaw Young whom he married April 28, 1957; daughters, Lisa Young Capehart (Tony) of Washington, NC, Lori Young Gray of Spencer; son, Brent Young (Stephanie) of Humble, TX; grandchildren, Harrison Gray (Shannon) of Durham, Glen Elizabeth Gray of Charlotte, Thomas Capehart of Wilmington, Robert Gray of Salisbury and Jameson Young of Humble, TX. A Private Family Graveside service will be held at Rowan Memorial Park with the Rev. Dr. Randal V. Kirby, minister of the First Presbyterian Church of Salisbury officiating. In lieu of flowers, memorials may be made to the First Presbyterian Church, 308 W. Fisher St., Salisbury, NC 28144 Summersett Funeral Home is serving the Young family. Online condolences may be made at www.summersettfuneralhome.com.

The family of Harry Glenn "Boonie" Young, Jr. created this Life Tributes page to make it easy to share your memories.