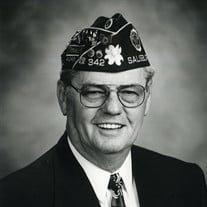 Harry Lee Garwood, 87 of Salisbury, passed away on Thursday April 30th 2020 at Harris Hospice within Novant Presbyterian Hospital in Charlotte. Born in Rowan County on January 9th 1933. He was the son of the late Thomas O. And Nannie Graham Garwood. Harry graduated from Boyden High School and served his country with distinction in the US Air Force. He was employed by Hanford’s Wholesale Florist in Salisbury and retired from R.J. Reynolds Tobacco Company after 30 years. Harry was a member of First Baptist Church of Salisbury, a member of and former commander of the Harold B. Jarrett, Post 342 American Legion and served as adjutant for over 15 years. Harry devoted many a summer as a member of the Rowan County American Legion Baseball Committee and was also an enthusiastic fan. In addition, Harry was a member of various other clubs to include; Jaycees of Melbourne and Orlando FL, 40/8 Voiture Locale 115 of Salisbury, the Andrew Jackson Masonic Lodge #576, the Lions Club, the Thirty Second Degree Scottish and York Rite, the V.F.W. and the Rowan County Veteran’s Council amongst others. He was also twice recognized as the Rowan County Veteran of the year. Harry embodied the value of “Service Before Self” by volunteering his time at the VA Medical center. In addition to his parents Harry was preceded in death by his wife of 44 years, Sara Gabriel Garwood; brothers, James Hugh and Roy Thomas and his sister, Marie Garwood Luckadoo. Harry was a devoted family man and was surrounded by them in his last days. He is survived by his daughters, Tammy Crandall (Steve), Julie Pyle (Jim) of Salisbury; grandchildren Kelly Torres (Danny), Steven Crandall (Lauryn), Katie Crandall, Josh Pyle, Stephanie Pyle, Cameron “CP” Pyle; great grand-children, Sara, Hudson, Ashton, Mkenzi, Harper, Everly and numerous nieces and nephews. He was also survived by his companion of many years Phyllis Richardson. Service- A private graveside service will be held Monday, May 4th, 2020 at Rowan Memorial Park in Salisbury with Rev. Brian Farmer officiating. Memorial- A memorial will be held at a later date at the Harold B. Jarrett American Legion Post 342. lieu of flowers, memorials may be sent to the Harold B. Jarrett American Legion Post 342, 1024 Lincolnton Rd. Salisbury NC 28144 or the Salisbury Lions Club, c/o Don Conner, 412 Willow Road, Salisbury NC 28147-7749. Summersett Funeral Home is serving the Garwood family. Online condolences may be made at www.summersettfuneral.com.

Harry Lee Garwood, 87 of Salisbury, passed away on Thursday April 30th 2020 at Harris Hospice within Novant Presbyterian Hospital in Charlotte. Born in Rowan County on January 9th 1933. He was the son of the late Thomas O. And Nannie Graham... View Obituary & Service Information

The family of Harry Lee Garwood created this Life Tributes page to make it easy to share your memories.

Harry Lee Garwood, 87 of Salisbury, passed away on Thursday April...

Send flowers to the Garwood family.