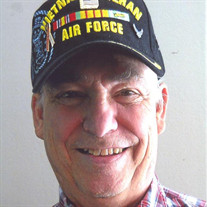 George Raymond Rutzler Sr, 75, of Gold Hill passed away peacefully Thursday, April 30, 2020 at his residence. Born August 4, 1944 in Jersey City, NJ he was a son of the late Edward Rutzler and Mary Bruder Rutzler. He graduated from Kearny High... View Obituary & Service Information

The family of George Raymond Rutzler created this Life Tributes page to make it easy to share your memories.

Send flowers to the Rutzler family.