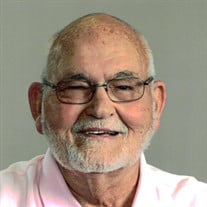 George Ray Little, age 75, of Salisbury, passed away peacefully after a brief illness, on Friday, January 22, 2021 at the Glenn A. Kiser Hospice House in Salisbury, NC. Born January 24, 1945, George was the son of the late G.T. Little and Lillie Little and raised in Marshville, NC. He graduated from Forest Hills High School in 1963 and served for four years in the United States Air Force, where he was stationed in Germany. He started as general manager of Cablevision (now Spectrum) in Salisbury in the early 1970’s and happily retired in 2001. He was an active member of Calvary Baptist Church. He was preceded in death by his parents, G.T. and Lillie Little; first wife, Sandra Caldwell Little on April 4, 1998 and his second wife, Mary Gilbert Little on February 8, 2020; Those left to cherish his memory are his daughters, Anna Little Bath (Stuart) of Lakeland, Florida, Michelle Little (Ken Howard) of Apex, NC, Misty Sells (Kirby) , April Kennerly (Patrick) and Traci Neal (Larry) all of Salisbury, NC; He is also remembered by his grandchildren, Ray and Matt Bath, Shelby and Cameron Kennerly, Georgia Howard, Taylor and Lee Sells, and Kerstin Neal; two great-grandchildren, Sawyer and Baylee, and two cats Trevor and Owen. He will also be remembered by his brother, Fleming Bell of Bryson City, North Carolina. The funeral service will be conducted 3:00 p.m. Monday, January 25, 2020 at Calvary Baptist Church with Pastor Scott Faw officiating. Mr. Little will lie in state from 2:00 -3:00 p.m. Burial will follow at City Memorial Park. Memorials may be made to Calvary Baptist Church Building Fund, 2255 East Ridge Road, Salisbury, NC 28144. Summersett Funeral Home is serving the Little family. Online condolences may be made at www.summersettfuneralhome.com.

George Ray Little, age 75, of Salisbury, passed away peacefully after a brief illness, on Friday, January 22, 2021 at the Glenn A. Kiser Hospice House in Salisbury, NC. Born January 24, 1945, George was the son of the late G.T. Little and Lillie... View Obituary & Service Information

The family of George Ray Little created this Life Tributes page to make it easy to share your memories.

Send flowers to the Little family.