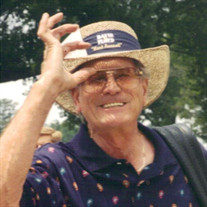 George Douglas Glover, Sr., age 88, of Salisbury passed away Saturday, July 24, 2021, at his residence surrounded by his immediate family. George was born June 17, 1933, in Rutherford County, the son of the late Lena Elizabeth Greene Glover and James Elijah Glover. He was a 1951 graduate of Ellenboro High School, and from there he went into the Air Force, serving from 1951-1955 during the Korean War. After the Air Force, he attended North Carolina State University on the GI Bill where he received his Electrical Engineering degree in 1961. After early jobs at Florida Power and Light, and Redstone Arsenal (NASA), George worked for Fiber Industries in Rowan County for 32 years until his retirement in 1997. George was a devoted member of John Calvin Presbyterian Church, serving as a Sessions member and led construction of their new Fellowship Hall. He loved volunteering, helping with Meals on Wheels and Rowan Helping Ministries. He also served on the boards of The United Way and The Red Cross. He was a member of the Milford Hills Lions Club where he was awarded the John Stickley Fellow. George and his wife, Blanche, were also committed to supporting Catawba College, establishing the George and Blanche Glover Endowed Scholarship to help aspiring students attend the college. George’s passion was golfing, and he also enjoyed playing bridge with the couples’ group, grilling, making homemade ice cream, working in the yard, and spending time with his family and friends. George was preceded in death by his parents, Lena and Jimmy, by 2 brothers, Larry And Henry, and by a sister, Nina. Those left to cherish his memories are his wife of 64 years, Blanche Greene Glover, whom he married February 14, 1957; a son, George Douglas Glover, Jr. (Lori) of Mt. Holly; a daughter, Tara (Ann) Glover Olsen (Don) of Bradenton, FL; and a granddaughter, Allison (Frances) Reed Haberstroh (Chris) of Otterbach, Germany. A Graveside Service with military honors will be at 1:00 PM Thursday, August 12, 2021, at Salisbury National Cemetery, and a Memorial service of remembrance will follow at 2:00 pm at John Calvin Presbyterian Church with Rev Kate Morrison, officiating. Visitation will follow in the Fellowship Hall. In lieu of flowers, memorials may be made to John Calvin Presbyterian Church, 1620 Brenner Ave., Salisbury, NC 28144, and to the Glenn A Kiser Hospice House, 1229 Statesville Blvd, Salisbury, NC, 28144. Summersett Funeral Home is serving the Glover family. Online condolences may be made at www.summersettfuneralhome.com.

The family of George Douglas Glover Sr created this Life Tributes page to make it easy to share your memories.

Send flowers to the Glover family.